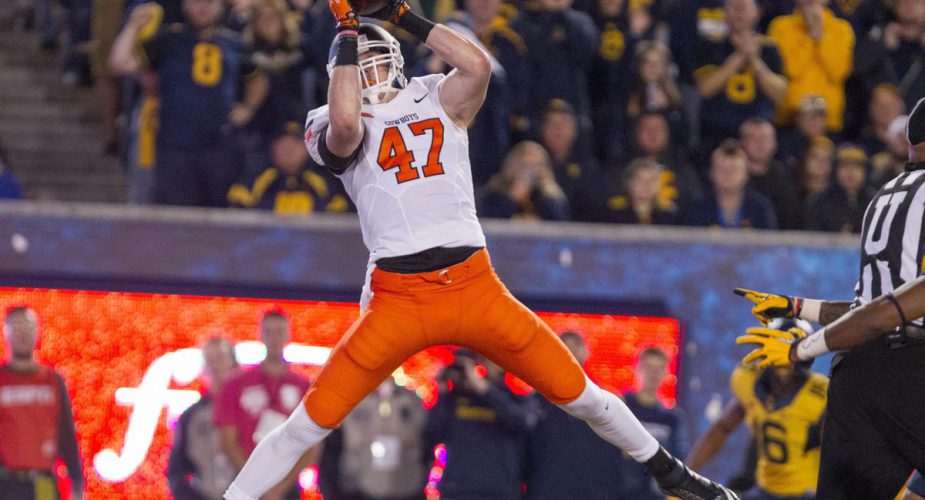 It’s no secret that along with quarterback, the Jets have gone years without a receiving tight end that has to be accounted for by opposing defenses.  Never has that been more evident than the past two seasons when Jets tight ends combined for a total of just 26 receptions in 32 games, by far the fewest in the NFL.

With that in mind, tight end is clearly a position of need for Gang Green and a spot they have been scouting heavily as the draft approaches, with Blake Jarwin among those being looked at by the team.

Jarwin, a 6′ 5” 248 lb Oklahoma native who walked on at Oklahoma State is now viewed as a late round pick at the tight end spot.

During his time at OSU, Jarwin was used in a variety of roles from in-line blocker, to H-back as well as splitting out wide as a receiver but was rarely targeted.  In 28 career games, Jarwin caught just 41 passes for 616 yards and 5 TD’s. Despite his lack of production, some suggest Jarwin’s physical attributes could enable him to have more of an impact as a pass-catcher at the pro level.

That potential is highlighted on his draft profile on NFL.com, but the amount of work Jarwin will need in order to improve as a blocker is also made abundantly clear as it reads:

Unexciting statistical production belies his potential as a pass-catcher on the next level. He has the necessary athleticism, uncover, and toughness to work both the first and second levels of the defense. Jarwin needs work in the weight room and as a blocker in order to handle reps as an NFL tight end. He has eventual starter potential and should find a spot on a roster as a rotational tight end with the potential to play in-line and on the move.

Jarwin is far from a blazer is indicated by his 4.73 40 time that would have placed 11th at this year’s combine, but that should come as no surprise given the fact that he’s not a target who is going to stretch the field vertically.

What he does bring is size, versatility, smooth route running and a willingness to go across the middle and battle a defender for the football.

Should the Jets opt to address positions such as quarterback, safety and cornerback in the early rounds as many predict, they’ll likely be looking to snag a tight end in the later rounds, and that’s where Jarwin could come in as the Jets attempt to compliment their outside receivers with a big target in the middle of the field to help defenses honest.

With just 25 days remaining until the NFL draft, it won’t be long before we find out.