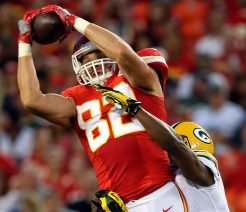 The Jets have announced the signing of former San Diego Chargers and Kansas City Chiefs tight end Brian Parker, a small school product out of the University of Albany.

We have signed TE Brian Parker.

Parker is no stranger to the Jets, but his last stint couldn’t have been much shorter as he was let go after just two days after failing a physical during the 2016 season.

Now, back with the Jets on a roster that is still devoid of an established tight end, the Jets give him his best chance to stick on an NFL roster.

Parker has just one career reception and has played double-digit snaps only once in his career (17 vs. Det on 11/1/15). Checking in at 6′ 4” 265 lbs, Parker is likely viewed primarily as a blocker with some developmental potential as a pass catcher.