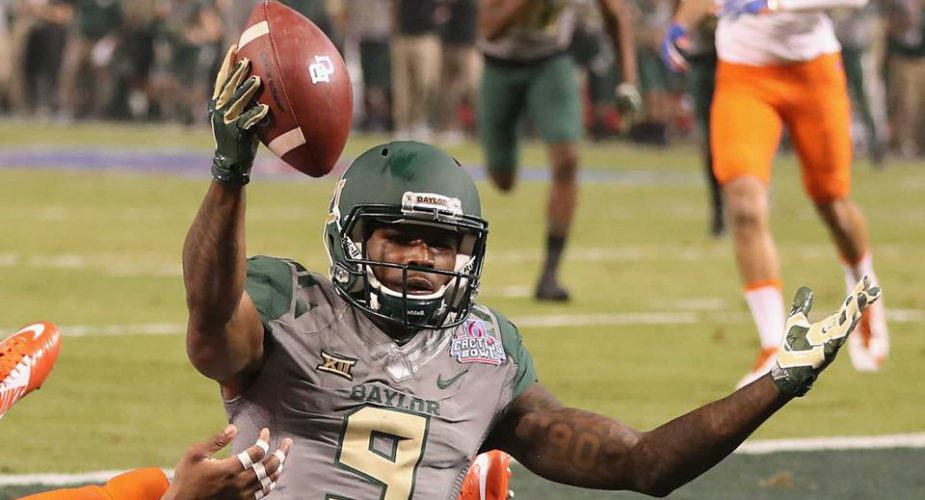 Depending on your perspective, the Jets may have fallen in to a bit of good fortune yesterday when they claimed rookie wide receiver KD Cannon off of waivers from the San Francisco 49ers.

We have claimed WR K.D. Cannon off waivers from SF and waived WR Deshon Foxx.

After a productive career at Baylor that saw Cannon haul in 195 passes for  3,113 yards and 27 touchdowns, he went undrafted despite the projections of many experts who had him pegged as a mid-to-late round pick.  Following the draft, Cannon was viewed as one of the top undrafted free agents on the market, and it appeared the 49ers shared that opinion.

The team handed Cannon $45,000 to come to the bay area.  A mere pittance to an NFL franchise, but a fairly large bonus for an undrafted free agent.

@SeanLTheWriter He didn't finish a route, & they cut him on the spot.

However, Cannon didn’t make it through his second practice with the 49ers who reportedly let him go due a lack of effort as Cannon wasn’t finishing his routes.  For a player who was undrafted, you may have expected Cannon to come in to camp with a chip on his shoulder and a desire to prove the doubters wrong, but apparently that wasn’t the case.  The fact that the 49ers viewed him as the complete opposite makes you wonder if effort was an issue at Baylor, perhaps contributing to him going undrafted.

No matter how you look at it, it’s a low-risk/high-reward scenario for the Jets who get a productive receiver who ran a 4.41 at the combine and has some experience with Jets quarterback Bryce Petty as the two teamed up in Petty’s final season at Baylor when Cannon caught 58 passes for 1,030 yards and 12 scores.