New York Jets head coach Todd Bowles announced after practice on Thursday that Gang Green would be without running back Matt Forte and outside linebacker Lorenzo Mauldin when they take on the Lions in Detroit this Saturday. 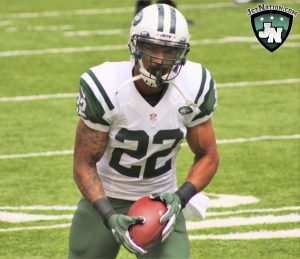 Matt Forte will be sitting out this Saturday night against the Lions.

Missing game action won’t hurt Forte nearly as much as it could Mauldin, as Forte’s roster spot is all but guaranteed.

Mauldin, on the other hand, missed the team’s week one win over the Tennessee Titans in a game that saw Josh Martin, who is battling Mauldin for the team’s starting spot, come away with a four tackles and a quarterback sack.

If the Jets third year linebacker out of Louisville can’t find a way to get on the field, he’ll certainly have a hard time winning the starting job, and may even be battling for a roster spot.

The Jets have been rotating several players in and out of the weak-side linebacker spot, using Martin, Corey Lemonier, Freddie Bishop and Frank Beltre and rookie draft pick Dylan Donahue.  While it’s not exactly a murderer’s row of linebackers, Mauldin is coming off of a season in which he appeared to be in and out of Todd Bowles’ dog house en route to tallying just 7 solo tackles (9 assists) and 2 1/2 sacks in 11 games (3 starts).

When things kick off in Detroit on Saturday, there’s a good chance that no Jets fan will be watching closer than Mauldin as he can only sit and watch, while others fight it out to take a job that many thought would be his by opening day.