Maccagnan Pulls off Shel of a Deal

This day was never supposed to come for Mike Maccagnan and the New York Jets.

Saddled with a troubled but highly talented defensive lineman in Sheldon Richardson who has made no bones about his high motor being attached to his desire for a big pay-day, Maccagnan wasn’t going to get more than a 4th round pick in any trade for the lineman.  If he was lucky, maybe he’d find a sucker to give him a 3rd round pick.  That’s what Jets fans were told, anyway. 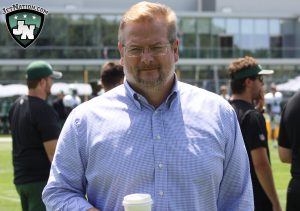 Maccagnan’s patience paid off in getting a 2nd round pick and Jermaine Kearse for Sheldon Richardson..

Then earlier tonight, something started brewing.  The Seattle Seahawks re-structured at least one contract to move money around and create cap space.  It seemed a deal for Richardson could transpire, and just a couple of hours later, it was announced that a deal had been struck.

Gee Scott of 710ESPN reported that the Jets were going to be acquiring wide receiver Jermaine Kearse, but no mention of who the Jets would be giving up, or if any picks were involved.  Was Maccagnan about to get fleeced, giving up a highly talented D-lineman for an average receiver and a mid to late-round pick?  The thought crossed the minds of many Jets fans, but that’s not at all how it played out.

My source is telling me that Jermaine Kearse has been traded to the NY Jets. #Seahawks

A short while later, we learned that Maccagnan had indeed agreed to move Richardson to the Seahawks for Kearse, and that the draft compensation was going to be a second round pick, higher than any “insider” or “pundit” had speculated in well over a year.

Final trade terms for the #Jets and #Seahawks: NYJ gets WR Jermaine Kearse, a 2nd and a 7th. SEA gets Sheldon Richardson & a 7th.

It was a coup for Maccagnan, and make no mistake, he needed it.

JetNation.com spoke with one source who confirmed that prior to extending defensive lineman Muhammad Wilkerson a year ago, there was an offer on the table of a first round pick for the lineman.  Maccagnan rebuffed the offer, hoping to get more.  Eventually, Maccagnen re-signed Wilkerson, forcing him to allow fellow defensive lineman Damon Harrion to walk across MetLife Stadium to the Giants.

Then earlier this off-season, Maccagnan had his sights set on trading wide receiver Eric Decker.  Rather than keeping his intentions inside the building, he revealed to reporters that if no deal could be struck, Decker would be released. With that being the case, nobody took the bait, and Maccagnan had to let Decker go, getting no compensation in return.

Richardson was going to be his next and biggest test, and this is one that he passed with flying colors by adding a second round pick, swapping 7th round picks, and upgrading a wide receiver corps that was desperate for a veteran presence.

More moves to come?  Stay tuned and chime in here on our forums.