Deep Draft Class Could Help Jets Offense Get Running in ’18 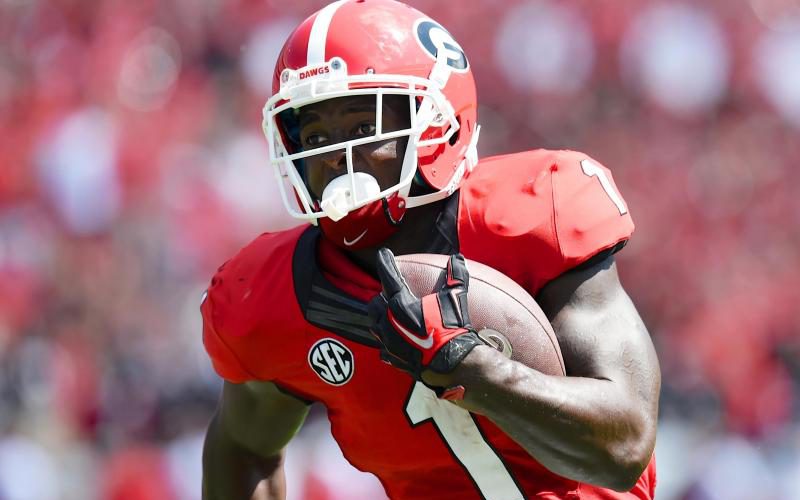 Heading in to this off-season, the New York Jets have no shortage of needs on both sides of the ball with free agency and the draft approaching.  While some holes will undoubtedly be filled by the former, the latter could (and should) be used to upgrade the running back position.

Matt Forte is unlikely to return next season and Bilal Powell getting a bit long in the tooth, the Jets have to look at options to add to their backfield moving forward outside of rookie running back Elijah McGuire.  Luckily for Gang Green, this is a deep class that could offer a suitable option outside of round one.

It’s not secret that Saquon Barkley is the top runner in the 2018 draft and is likely off the board within the top 10 picks.  Michel is the next best option on the board and while he could also go in round one, it’s not all that unrealistic to expect him to fall to the first few picks of round 2.

The 5′ 11” 215 lb Michel can run with speed and power which enabled him to average a gaudy 6.1 yards per carry in his time at Georgia.

Despite splitting carries with Leonard Fournette two seasons ago, Guice piled up over 2,500 yards and  26 touchdowns over the past two campaigns.

A powerful downhill runner with very good agility, Johnson gave his draft stock a boost late in the season when he had 62 carries for 271 yards and a touchdown to go along with 87 yards and a score on five receptions against the closest thing he would see to an NFL defense in Alabama and Georgia.

Ahead of Michel on the depth chart during his time at Georgia, the 5′ 10” 220 lb Chubb is a powerful back who averaged 6.3 YPC over fours seasons.  There are some questions about Chubb’s ability to catch the ball out of the backfield, but his production in a tough conference could see him come off the board on day two.

Watching Jones for USC this season made you think he could be one of the most explosive offensive players in this class.  Jones had a five game stretch late in the season that saw him run for 814 yards and 10 touchdowns.  He may need to put on some weight if he hopes to be a featured back, but the playmaking ability is clearly there.

Ballage is a load at 6′ 2” 230 and earned plenty of praise during senior bowl week when he clocked in as the second-fastest back in mobile at 19.42 MPH according to the Senior Bowl’s official page.  At one point last season, Ballage was reportedly clocked at 22 MPH at the school’s state of the art facility, just .05 MPH slower than last year’s fastest NFL back in Jacksonville’s Leonard Fournette.  A back with that size/speed combo could continue climbing draft boards with a strong combine performance.

A multi-dimensional back who has lined up at H-back and tight end, Samuels rushed for 1,100 yards at NC State but was an even bigger weapon in the passing game where he hauled in 202 passes for 1,855 yards.  Most pundits appear to be projecting him as a running back come draft day, but his versatility will make him very attractive for GM’s around the league.

Not a power runner at 5′ 9” 188, Wadley has a chance to make an impact in a west coast offense as his excellent hands and elusiveness would give him a chance to make big plays on short routes.  During his time at Iowa, Wadley averaged just over 10 yards per reception on 64 catches over his final two seasons.  Wadley won’t be a feature back, but a complimentary player in the mold of Bilal Powell if he can add some bulk.

Here’s a dark horse candidate worth keeping an eye on.  Coleman split carries with Myles Gaskin during his time at Washington and impressed when his number was called.  In limited action, the 5′ 11” 235 lb Coleman averaged 5.3 yards per carry and has the frame to take a beating in the NFL.  Don’t be surprised if the Washington product lands with Pete Carroll and the Seahawks.

Even with 10 backs highlighted, there are still some other runners with pro potential such as San Diego State’s Rashaad Penny, Nyheim Hines, a quick/speedy back out of NC State who can return punts and Alabama’s Bo Scarborough just to name a few more.

With such a deep running back class and as many as six quarterbacks projected to go in the first two rounds of the draft, some talented runners will be pushed down and there for the taking in the middle to late rounds where the Jets (and others) will be able to steal a featured back for a relatively low-cost.  Who’s on the Jets radar?  Only time will tell.