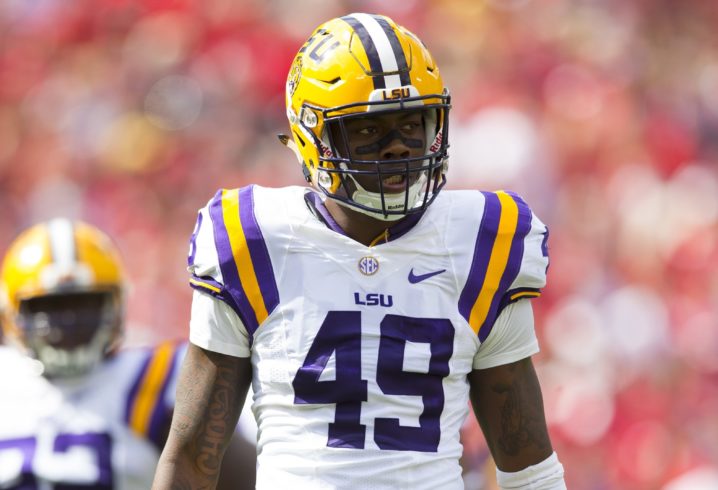 Even with a boatload of salary cap room and three draft choices in the top 50, there’s no guarantee that Mike Maccagnan and the New York Jets will be able to fill their biggest needs with elite talent which would clearly be the team’s goal.

One spot where the Jets might be able to get a top-15 talent well beyond that spot in the draft is in the case of edge rusher Arden Key out of LSU who has been plagued by multiple off-field issues.  Based on a JetNation twitter poll, 71% of Jets fans say they would be on board with snapping up Key with their first pick in the second round.

Jets fans, if character concerns drop Arden Key to round two, do you want the Jets to roll the dice on a potential premier pass rusher or take a pass?

Key’s mysterious troubles off the field have been well publicized, leading some to predict a free-fall on draft day with Matt Miller of Bleacher Report mocking him to the Denver Broncos with the 40th overall pick while WalterFootball has key going 47th to the Arizona Cardinals.

It seems given the chance, Jets fans wouldn’t want key to fall that far as they would be on the clock before either of those teams with the first of their two second-round picks at 37.

Key was an essential member of the LSU Tigers’ defense before taking an unexplained leave of absence from the team that his father would later describe as follows:

“He lost himself. He had so much success early. All the pressures of being a student-athlete. We forget he’s still a kid trying to balance life out. It was all coming down on him. Let the past be the past. All those rumors are going to surface through his career. As a family, we had challenges and we worked through them, and we’re still working through them.”

In addition to his leave of absence, Key reportedly put on a considerable amount of weight, ballooning up to 270 lbs, despite being listed at 238, prompting one scout to say, “Any time you see a player balloon up like Arden Key has, it’s a big concern. Whether you are dealing with injuries or not, there are certain conditioning and nutrition standards you need to be following.” according to NFL.com.

Off-field issues, weight gain and a shoulder injury which isn’t expected to linger isn’t enough to scare Jets fans off from a player who piled up 20 sacks and 24 tackles for loss in just 31 collegiate contests.  Will Mike Maccagn feel the same?