For the first time in what feels like forever, it’s actually an exciting time to be a fan of the New York Jets.  General Manager Mike Maccagnan has used the war chest of funds he created in a roster tear-down last off-season to get better and younger and several positions on both sides of the ball.

The additions of cornerback Trumaine Johnson, wide receiver Terrelle Pryor, running back Isaiah Crowell and linebacker Avery Williamson are just a few of the pieces that have been brought in to continue a re-build that had to be initiated after the 2016 season was a dud as several veterans clearly weren’t getting it done, or just weren’t worth the money they were being paid.

While there’s no denying Maccagnan’s moves have greatly improved the team, the reality of the situation is that in gutting the roster last off-season, Maccagnan was in a position where there was nowhere to go but up.  Now that he has the Jets trending in the right direction, the GM can ill-afford to screw it all up come draft day, and that’s precisely why he can’t gamble on Wyoming quarterback Josh Allen.

Make no mistake, the Jets traded up to the third spot in the draft to nab what they hope will be their eventual franchise quarterback, and there are three of them that could be easily justified.  Snagging UCLA’s Josh Rosen, Oklahoma’s Baker Mayfield or USC’s Sam Darnold, should he fail to become the top pick, would put in place a quarterback who most expect to be successful for the long-term. 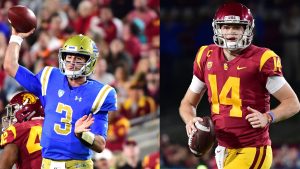 Then there’s Allen, the kid with the golden arm who can effortlessly sling it 80 yards down field while using his impressive mobility to roll away from pressure.  When Allen is on, his traits look superhuman.  But when he’s off, you wonder if it’s the first time he’s picked up a ball.  After bombing on his choice of Christian Hackenberg in the second round two drafts ago, Maccagnan, even if he’s in love with Allen, will be on an incredibly short leash if he were to make him the team’s top choice.

Even if Allen were to go on and prove the doubters wrong, he would have to do so almost immediately, and among those who cover the sport, they appear to be in lockstep, insisting Allen will need at least one red shirt season.  That’s a luxury Maccagnan can’t afford at this point in time.  Good luck telling this fan base that the team has taken another quarterback who needs another “red shirt” season.  If you’re going to do that, you may as well be carrying a box out of your office filled with your belongings on your way to the podium.

Yes, the growing success of video games like “Madden”, paired with round-the-clock access to player information and highlight reels has convinced countless fans that drafting and developing an NFL quarterback is as easy as pressing a couple of buttons while you scroll through your Facebook and Twitter feeds.  Sadly, it’s nothing like that.

Time and again we see accomplished NFL GM’s swing and miss at the quarterback position despite impressive resumés as both players and/or executives.  Just ask John Elway in Denver how easy it is to find a quarterback in the draft after he’s used premium picks on Brock Osweiller and Paxton Lynch in recent years, then had to spend a fortune on Case Keenum while considering the use of yet another first-round pick this season on a signal caller.  Ozzie Newsome is often referred to as the top talent evaluator in the NFL, but some forget that he didn’t win a championship before he drafted Joe Flacco, who was the tenth QB taken during his time as a GM for the Browns/Ravens.

Elway is a god in Denver and the climate in the NFL has changed since Newsome missed on his first nine quarterbacks.  Mike Maccagnan has to know that the team’s failures under his watch won’t buy him any excuses if he swings and misses at the QB position again.  He won’t get to draft ten quarterbacks, and the only place you’re likely to see a monument dedicated to the GM is probably in a Starbucks somewhere in Florham Park.  If he nails this pick, that changes in a hurry.

Maccagnan’s job won’t be safe if he misses at quarterback again, so the choice he makes with the third pick should be.  While there’s no quarterback without warts in this class, none are bigger risks than Allen and his lifetime 56% completion percentage at Wyoming.

If Maccagnan wants to keep his job as the man calling the shots for Gang Green, there’s no logical reason for him to take Allen over any of the other three quarterbacks mentioned.  If he were to do so, the excitement currently being experienced by Jets fans would quickly turn to anger, and he’d be handing Christopher Johnson the hammer he’ll need to start banging nails in to the GM’s coffin.  For that reason alone, Maccagnan simply can’t roll the dice on Josh Allen….can he?