If there’s one positive thing about being a brand new NFL GM taking over a team nearly bereft of talent, it’s that you may have a bit of extra time to spend in developing some of your young draft choices.  After all, it’s not as if Jets GM Mike Maccagnan came to town with a robust group of quality players and few roster spots available.  His predecessor, John Idzik, filled the roster with players who would have likely been viewed as camp bodies anywhere outside of his office.

However, with three drafts in the rear view mirror, another draft just around the corner, and a spending spree in free agency, it’s going to be time for Maccagnan to start dumping previous picks who have either failed to impress on the field, or haven’t been able to stay on it due to injury.

This means that Mac is likely on the verge of his first housecleaning after cutting just one drafted player (Jarvis Harrison) since taking over as Jets GM.  While it may seem impressive to retain almost three entire draft classes, the number is misleading as several players have hung around by spending huge chunks of time on injured reserve.

OLB Lorenzo Mauldin, WR Devin Smith, WR Charone Peake, CB Jeremy Clark, OLB Dylan Donahue and TE Jordan Leggett spent all or most of 2017 on injured reserve.  Had they been healthy, there’s no telling who would have stuck and who would have been let go.

Here’s a look at who could be sent packing by the time the team opens up their 2018 season on Monday Night Football in Detroit.

OLB Lorenzo Mauldin: Mauldin spent all of last season on IR with a back injury after an up and down 2016 season.  He’ll get his shot to win a job this season, but if the injuries persist and/or he doesn’t elevate his level of play, he could be gone.  Mauldin did show some pass rush ability as a rookie, and his roster spot will be safe if that’s the case again this year.

WR Devin Smith: Smith has spent more time on IR than he has as an active player.  It would take a miracle for Smith to Stick this season, a devastating blow as the former second-round pick was lauded by experts at the time of his selection.  Smith’s body hasn’t held up to the demands of the NFL.

Bryce Petty: A project QB who was taken in the fourth round, things haven’t worked out for Petty thus far and he’s a likely casualty this off-season.

DL Deon Simon: Simon was impressive two years ago and appeared to trending upward.  He followed that with a strong pre-season in 2017 but the Jets opted to go with free agent addition Mike Pennel in Simon’s place, leaving him as the odd man out.  The Jets are thin on the D-line this season so Simon has an outside chance to stick, but don’t be surprised if he doesn’t.

WR Charone Peake: A traits-based seventh round pick, Peake spent last season on IR and the Jets are currently carrying sixteen WR’s. Somebody has got to go. 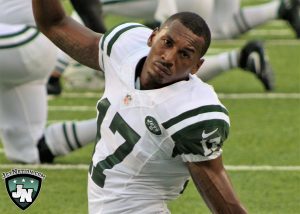 QB Christian Hackenberg: Maccagnan’s worst pick to date, Hackenberg has yet to set foot on the field and the team just traded up to draft a quarterback later this week.

OLB Dylan Donahue: Moving on from Donahue wouldn’t be all that likely after just one season if the only issue was his injury last year, but two DUI arrests since being drafted will have Donahue under the microscope.

WR Ardarius Stewart: A third-round draft choice just one season ago, it’s hard to envision Stewart being cut by Maccagnan, but the situation doesn’t look all that good for the Alabama product.  During the course of last season, Stewart was passed on the depth chart by fourth-round pick Chad Hansen.  In addition, the Jets signed Terrelle Pryor and Quincy Enunwa is expected back this season.  If Stewart is behind Pryor, Robby Anderson, Jermaine Kearse, Enunwa and Hansen, he’ll be competing with nine or ten players for the sixth receiving spot.

As they say, “out with the old, in with the new”, so when the “new” comes in over the course of the next week via draft choices and undrafted free agents, it may be time for Mike Maccagnan to wave goodbye to those players who haven’t worked out up to this point.