Luck for Sam! Darnold Falls to Jets in Round 1 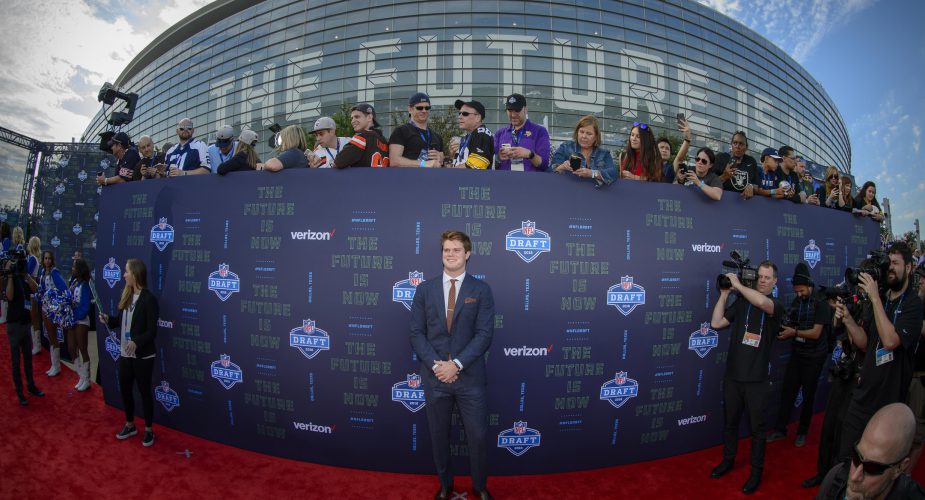 The pick is in and it’s Sam Darnold, ladies and gentleman.  That’s right.  The quarterback who has been projected as the number one choice for over a year, fell to the New York Jets at number three, and they took full advantage.

In Darnold, the Jets hope they’ve finally found their long-term answer at the quarterback position by selecting the former USC Trojan.

A three-year starter in college, Rosen threw 57 career TD’s to 22 INT’s at USC while completing 64.9% of his passes and is regarded by may as the best QB in this draft.  Darnold’s scouting report per NFL.com lists his comp as Colts QB Andrew Luck and reads as follows:

Right now, Darnold is the second-most famous member of his family. His grandfather, Dick Hammer, was a USC basketball player, an Olympic volleyball player, and actor — in fact, he was one of the Mr. Marlboro Men. Sam’s father, Mike, also played football at Redlands College and several other relatives were collegiate athletes. Soon enough, however, Darnold will become the top dog in the family. The High School All-American and Orange County Offensive Player of the Year (67.8 completion percentage, 2,996 yards, 39 touchdowns, eight interceptions) also excelled at basketball and baseball, even though he missed time with a broken foot (suffered during football) and a broken finger. Darnold redshirted in 2015, sitting behind Cody Kessler and Max Browne. Browne ended up transferring to Pitt after 2016, as he saw the mature, pro-sized, strong-armed, and accurate Darnold take his job. He played in all 13 games, starting the final nine, completing 67.2 percent of 366 passes for 3,086 yards, 31 touchdowns and just nine interceptions. Darnold also has the athleticism to make plays with his feet (62 rush attempts, 250 yards, two rushing touchdowns). He was voted first-team All-Pac-12 by league coaches in 2017, completing 63.1 percent of his passes (303-of-480) for 4,143 yards and 26 touchdowns on the for the conference champs. His 13 interceptions and 11 fumbles during his sophomore season have scouts wondering about his ball security skills, however.

At the end of the day, Darnold has NFL size, arm strength, accuracy, pocket mobility, poise and field reading capability. His windup is an eyesore for sure, but he has the velocity to mitigate the additional release time. While Darnold has the mental toughness and talent to start tomorrow, early sideline seasoning could help him better process coverages in an attempt to eliminate future interceptions. Darnold has the tools to thrive in any system and doesn’t have to have perfect protection to succeed. His floor is solid starter, but he has the ceiling to be one of the top tier quarterbacks in the game as he gains more experience.

“I think he caught some backlash this year because of the pre-season hype and the interceptions. He’s still the most complete quarterback in this draft with the best makeup to be a good pro.” — AFC Executive
For over a year, Jets fans have wondered which QB would have their name called in Dallas, and while they didn’t quite “suck for Sam”, a trade up to the third overall pick did help the Jets Luck for Sam.
Stop by our forums to discuss Sam Darnold to the Jets with other die-hard fans.