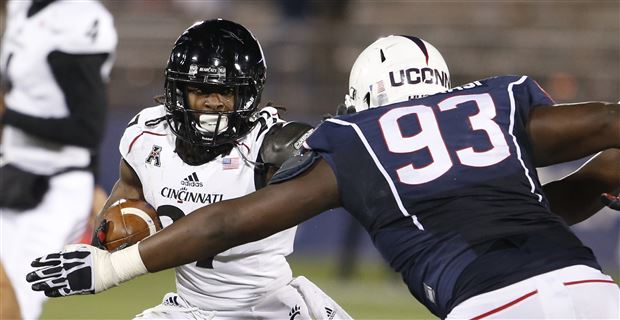 The Jets used a pair of back-to-back draft choices to address their need at slot cornerback and depth on the defensive line by drafting Tulane product Parry Nickerson who ran a 4.32 at the combine in Indianapolis, and defensive lineman Foley Fatukasi out of Connecticut.

Player bio’s on Nickerson and Fatukasi who were both projected as 4th/5th round choices read as follows:

A first-team all-state pick from Louisiana, Nickerson thought he would get a chance to play for his home-state team as a true freshman. But he had to redshirt with a knee injury after just one game, despite making seven stops and forcing a fumble in that one appearance. Nickerson bounced back for his sophomore campaign, earning honorable mention All-Conference USA and first-team Freshman All-American honors by starting 11 of 12 games played, compiling 51 tackles, 2.5 for loss, six interceptions (ranking seventh in the FBS), and six pass breakups. Nickerson returned to the starting lineup for all 12 games in 2015, recording 46 stops, 3.5 for loss, and a team-leading eight pass breakups. He earned all-conference recognition once again in 2016 (second team) after intercepting four passes and returning them for 171 yards (ranked fourth in the FBS). Nickerson also deflected nine passes and posted 29 tackles on the year.

Nickerson is a gritty, undersized cornerback who possesses some of the more impressive ball skills in this year’s draft. His lack of size and length will likely force him into the slot where his athletic ability and technique should allow him to make his mark. Nickerson is tough, smart and instinctive, but he needs to prove he can hold up as an NFL tackler. He should compete for a role as nickel cornerback early in his career.

Fatukasi, a projected mid-round pick is a two-gap lineman was described as follows:

Fatukasi (whose full name is pronounced foe-luh-RUN-soo faa-too-KAH-see) is a load in the middle that can take on multiple blockers and push through to the quarterback. “Foley” was the first player from his Long Island, New York high school to immediately enroll at a major college to play football. After a redshirt season, Fatukasi started three of 12 games played in 2014, making 31 tackles, three for loss. He garnered honorable mention All-American Athletic Conference honors as a sophomore, starting 11 of 13 games and being credited with 50 tackles, eight for loss, seven sacks, and four forced fumbles. He continued to excel as a junior, starting all 12 games with 43 stops and 2.5 sacks. Fatukasi did not earn all-conference notice from AAC coaches in 2017, but still started all 21 games for the Huskies (45 tackles, 7.5 for loss, four sacks).

Fatukasi is raw but talented and offers a well-built, versatile defender who can be played at a variety of positions by teams who employ varied defensive fronts. He needs to improve at the point of attack, but that could happen if he’s asked to slant less and improves technique as a two-gapper. Fatukasi’s flashes of power and disruption could be foreshadowing a future as a quality NFL starter with the ability to play on passing downs if he can reach his potential.