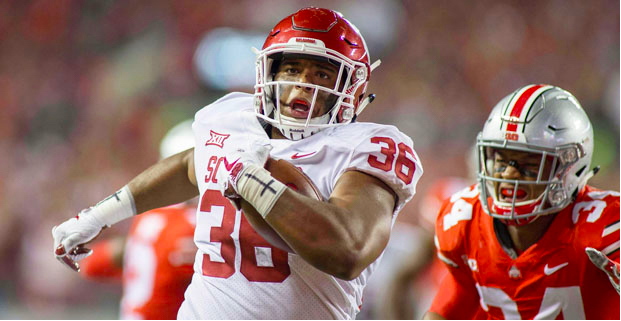 With the NFL draft all wrapped up, the Jets have reportedly begun adding undrafted free agents according to multiple reports.  Keep in mind, these deals and agreements sometimes fall through at the last minute, so until it comes from the team, it’s not official.  With that in mind, here are the players the Jets have reportedly agreed to terms with on deals or invited to rookie mini camp.

FB Dimitri Flowers, Oklahoma: Viewed by many as the top fullback in this class.  A projected fifth round pick by NFL.com Flowers has a legitimate shot to stick with Gang Green.

WR Deontay Burnett, USC: A slot receiver who gives Sam Darnold a familiar face to work with early on, Burnett is a long shot to stick on a roster that’s currently loaded at the WR position.

LB Tre Williams, Auburn: Unlikely to compete for much more than a spot on special teams at this point, Williams racked up 280 tackles but just 3.5 sacks in his time at Auburn.

OL Darius James, Auburn: A trifecta of Auburn players, James played both left and right tackle at Auburn during the 2016 and 2017 seasons.  Could be a candidate to move inside.

K Canon Rooker, Middle Tennessee: Without an established kicker on the roster, the Jets were bound to add one as an undrafted free agent.  Rooker made 83.3% of his kicks in college with a career long of 51 yards.

RB Ryan Green, FSU: Green joins a running back room that has a lot of bodies, but few players etched in stone to be on the roster when training camp beings.  Green has been clocked in the low 4.4’s who was used sparingly as FSU where he averaged just over 6 yards per carry on 63 career attempts.

DL Nifae Lealao, Vanderbilt: A long shot to stick given the Jets moves over the past few days that have re-built their defensive line..

OL Dakoda Shepley, University of British Columbia: The Detroit native played his college football in Canada where he was plugged in at right tackle.

DL Mychealon Thomas, Texas Tech: Thomas moves much better than you would expect from a 320 defensive who does a good job of keeping his eyes in the backfield.  Worth keeping an eye on as a developmental practice squad possibility.

SS Tyrice Beverette, Stony Brook: Not signed as an UDFA, Beverette has been invited to rookie camp with a chance to win a shot at a deal according to Calvin Watkins of Newsday.