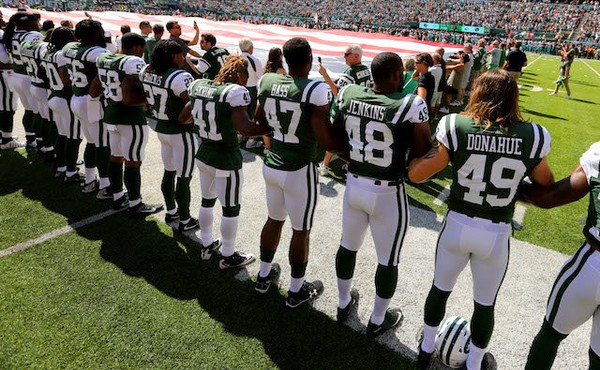 The policy adopted today was approved in concert with the NFL’s ongoing commitment to local communities and our country — one that is extraordinary in its scope, resources, and alignment with our players. We are dedicated to continuing our collaboration with players to advance the goals of justice and fairness in all corners of our society.

The efforts by many of our players sparked awareness and action around issues of social justice that must be addressed. The platform that we have created together is certainly unique in professional sports and quite likely in American business.  We are honored to work with our players to drive progress.

It was unfortunate that on-field protests created a false perception among many that thousands of NFL players were unpatriotic. This is not and was never the case.

This season, all league and team personnel shall stand and show respect for the flag and the Anthem. Personnel who choose not to stand for the Anthem may stay in the locker room until after the Anthem has been performed.

We believe today’s decision will keep our focus on the game and the extraordinary athletes who play it—and on our fans who enjoy it.

The 32 member clubs of the National Football League have reaffirmed their strong commitment to work alongside our players to strengthen our communities and advance social justice.  The unique platform that we have created is unprecedented in its scope, and will provide extraordinary resources in support of programs to promote positive social change in our communities.

The membership also strongly believes that: