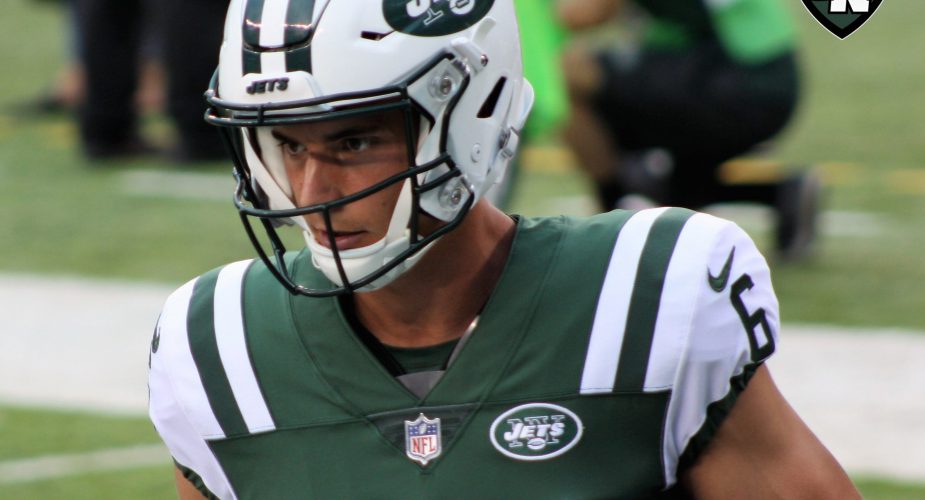 Jets’ wide receiver Chad Hansen has been making waves this offseason in organized team activities and minicamp with impressive catches and his improved route running skills. Is the second-year receiver ready to break out and be a contributor for Gang Green going forward?

If you look at what he did in his rookie season, you would probably say the answer to that question is no, but with more opportunity should come better results. His first year in the NFL only provides a small sample size, but he was very productive in college, leading the Pac-12 in catches and yards in 2016. Let’s take a look at what the young receiver has been able to do throughout his career.

Hansen was the Jets’ fourth-round pick out of California in the 2017 draft. During his final season at Cal, Hansen played in 10 games and managed to rack up 92 catches, for 1249 yards, and 11 touchdowns despite missing 2 games with a high ankle sprain. He also had 6 games with 10+ catches and 7 games topping 110 receiving yards.

Those numbers are pretty impressive, especially when you consider he only totalled 19 catches, 249 yards, and 1 touchdown the previous season in 2015, albeit in only 7 games. Hansen showed in his college career that he can be a high volume option in a passing attack when he is heavily targeted.

The former California product ran his routes strictly from the outside with the Golden Bears and was excellent at moving the chains, averaging roughly 9 receptions per game. Like a few receivers already on the team, Hansen is versatile and can line up on the outside or in the slot in Gang Green’s West Coast style offense. He could be exactly the type of receiver the Jets can use in their offense to complement their bigger playmakers as they already have a home-run threat in WR Robby Anderson, and a Swiss Army knife in Quincy Enunwa.

Although he only had 9 receptions for 94 yards in his rookie season, he showed some ability to make plays, create separation, and find holes in the middle of the field sitting down in the soft spots of a zone defense. He also showed that he can make contested catches and high point the ball for big plays as he did against Saints’ star cornerback Marshon Lattimore during their week 15 tilt. However, his strong hands are probably his best trait having dropped 0 passes in his rookie year and only 4 in 2015-2016 at California.

Hansen only played in roughly 33% of the team’s offensive snaps in 2017 as he saw more playing time later in the season when former Jets’ receiver Jeremy Kerley was suspended by the league and ultimately released by New York. It will be interesting to see what the 23-year-old can do with more playing time if earned in 2018. However, that playing time could be hard to come by.

The Jets receiving corps is a bit crowded as of now with Anderson, Enunwa, Jermaine Kearse, Terrelle Pryor, and ArDarius Stewart. If Hansen continues his strong play in training camp and in preseason games, he’ll certainly earn some more time on the field this season. If he can carve out a situational role in three or four wide receiver sets and on third-downs he should have some value to the team, but that won’t be easy with all of the quality targets ahead of him on the depth chart.

Pryor has had some injuries in the past, most recently an ankle injury that kept him off the field during OTAs and minicamp. Enunwa is also set to return from missing all of 2017 after having surgery on a bulging disc in his neck. Injuries are always a concern in the NFL so Hansen should provide excellent depth should they be unable to stay healthy or if anybody else lands on the IR.

Hansen looks like he’s ready to make the year two jump, but the question remains will the reps be there for him? There will be plenty of mouths to feed in the Jets’ new-look offense and barring an injury, he will really have to open eyes this summer to truly make an impact in 2018. The 2019 season is probably more realistic to expect Hansen to step up and earn a larger role in the Jets’ offense.