If you’re a die hard fan of the New York Jets, there’s a good chance you had the chance to take a look at this article from Brian Costello of the New York Post in which he offers praise to Jets GM Mike Maccagnan for his purge of the Jets roster in 2017.

There were plenty of fans who were unhappy with some of the decisions Maccagnan made when he cut ties with fan favorites Darrelle Revis, David Harris, Eric Decker, Nick Mangold and Brandon Marshall.  Also sent packing were right tackle Breno Giacomini, safety Marcus Gilchrist and left tackle Ryan Clady.  Plenty of big names let go, and plenty of cap space saved as a result.

For Maccagnan, some of those decisions had to be more difficult than others, but to offer nothing but praise for the moves seems a bit disingenuous.  After all, of those players let go, how many were brought in by Maccagnan in the first place?  Should a GM be lauded for dumping a player he decided to sign if the deal turned out to be a failure?  Well, let’s look at each one individually.

Darrelle Revis: The re-signing of Revis was one that had Jets fans fired up.  After all, the roster from the previous season as constructed by failed GM John Idzik had the likes of Darren Walls and Antonio Allen starting at cornerback (yes, that really happened).  Revis got huge money, and while Maccagnan was the GM, prevailing wisdom is that Jets owner Woody Johnson was behind the move.  Revis was solid for most of the 2015 season, but faltered down the stretch and was a disaster in 2016.

Signing Revis and being forced to let him go is a wash for Maccagnan as the rookie GM was simply following orders from an owner who was none too pleased after watching his best player win a Super Bowl elsewhere.

Pass or Fail:  Incomplete A splash move under the direction of the team owner is a reflection of a general manager doing what his boss calls for, so while Revis’ re-signing blew up in their collective faces, this one falls on Woody Johnson.

Brandon Marshall: The Jets acquired Marshall for a fifth-round draft choice prior to the start of the 2015 season.  The immediate dividends were exceptional as Marshall had one of the best seasons in team history in 2015.  However, the former Bronco and Bear  was let go after a poor showing both on and off the field in 2016.  Having given up just a fifth round pick and getting Marshall along with a 7th in the deal, the price tag, in reality was a few pennies.  So while the deal would have looked far better today had Marshall given the Jets another season or two of quality play, the reality is that the acquisition was a bad one, albeit one that came with a negligible price tag.

Pass or Fail: Pass Had the Jets surrendered perhaps a third round pick for Marshall, this would have to be deemed a huge failure by the GM.  However, losing a fifth and gaining a 7th almost makes the deal and the subsequent release of Marshall after a fantastic 2015 season feel like a wash. Call it what you like, but the team lost close to nothing in the deal and created cap space in sending Marshall on his way.

David Harris: Both Harris and Decker were let go just before the start of the 2017 season in a pair of moves that came with plenty of scrutiny.  Especially for Harris, who was a mainstay in the middle of the Jets defense for a decade.  Harris was on the final year of a deal that was given to him by Maccagnan just a few years earlier.  As is the case with every NFL great, the day will come when your performance no longer matches up with your salary, and the Jets believed that would be the case with Harris.  Apparently they were right.  Harris would spend one season on the bench in New England before walking away from the game.

Pass or Fail: Pass The proof was in the pudding.  Harris didn’t have much left in the tank and the Jets replaced him with former Jets linebacker Demario Davis who had a career year in 2017.  With Davis having also walked in free agency, Harris’ spot will be filled this season by Avery Williamson. 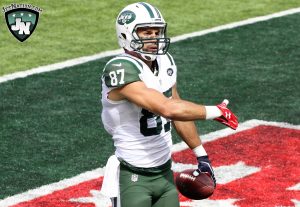 Eric Decker: Decker was a rare player for the Jets as somebody who was signed by John Idzik and then went on to play some quality football.  He was eventually released along with Harris after an ineffective 2016, Decker struggled to stay healthy in Tennessee and when he was, didn’t manage to do much anyway.

Pass or Fail: Pass With the emergence of some of their young receivers, the decision to cut the dinged-up Decker proved to be a good one.

Nick Mangold: Another victim of the purge, Mangold was trying to come back from an ankle injury that would likely hobble him for at least part of the 2017 season.  Even still, if the Jets would have gone with a dinged up Nick Mangold, it would have been better than what they got in going with a healthy Wesley Johnson.

Pass or Fail: Fail: After being let go, Mangold made it clear that he was never approached about coming back at a lower price.  This was a huge miscalculation by the Jets, who should have at least brought Mangold in for a look during training camp and during the pre-season.  They didn’t, and they paid for it.

Ryan Clady: Brought in to replace D’Brickashaw Ferguson after the former first round pick announced his retirement, the oft injured Clady had a difficult time staying on the field and was gone after just one season.

Pass or Fail: Fail Maccagnan fails here because the whole situation stinks of something that could have been resolved sooner to give the Jets a chance at a more capable left tackle.  Waiting as long as they did to present Ferguson with a pay cut that led to his retirement is part of what left the Jets scrambling to find a replacement.  They took a shot and failed with Clady and were reportedly willing to take one more look at him at the position, but Clady declined, opting to retire after years of serious injuries. 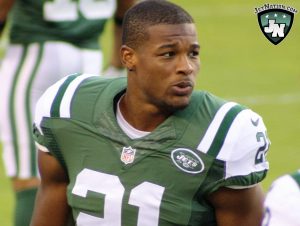 Marcus Gilchrist: Gilchrist had a nice first season in Green and White before falling apart along with the rest of the secondary in 2016.  He caught on with the Houston Texans where he seemed to be closer to the 2015 version than the 2016 version of himself.  He’s now in Oakland trying to win himself a job.

Pass or Fail: Pass Gilchrist saw his play suffer after a strong first season in New York.  With safeties Jamal Adams and Marcus Maye taken in round 1 and 2 respectively of the NFL draft, there wasn’t going to be room for Gilchrist.

Pass or Fail: Pass Rookie right tackle Brandon Shell outplayed Giacomini in the closing weeks of the 2016 season, so it was time to cut bait with one of John Idzik’s prized free agent signings to make room for a better, younger and cheaper player.

So while Maccagnan does deserve a great deal of credit for cutting many of the right players at the right time for the right reasons, there are some moves he could have handled differently.  All in all, as much of it was done to start a full re-build and the Jets are primed to enter season two of said rebuild with the top quarterback in the NFL draft. you’d give new meaning to the term “Same Old Jets Fan” if you can’t find reasons to be happy with the way things have transpired thus far.