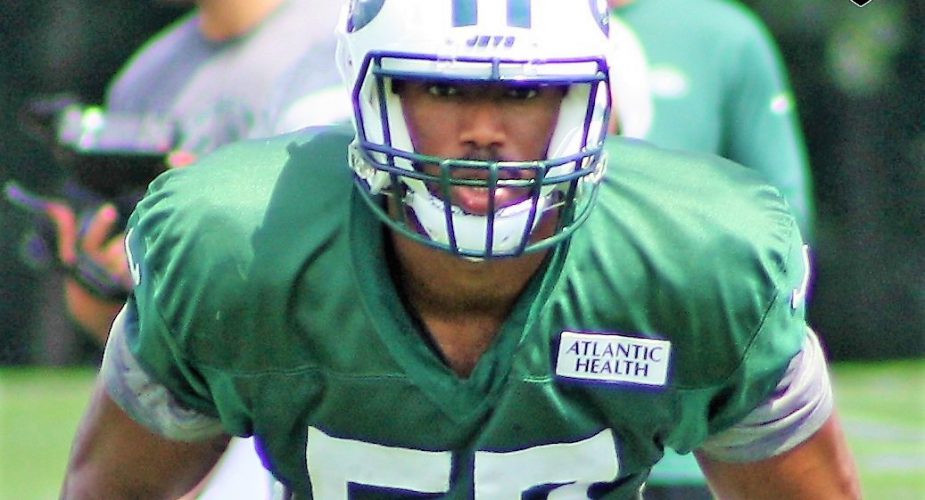 When the Jets rolled out their starting defense during the Green & White Scrimmage the other night at Rutgers University, one thing that stood out was seeing little-known linebackers Frankie Luvu and Brandon Copeland lining up opposite each other as the team’s two starting outside linebackers.  Again today at Florham Park, it was the same story when team periods kicked off.

Clearly Jordan Jenkins is entrenched as the team’s SAM ‘backer in Todd Bowles defense, but the Jets are still looking for an edge rusher on the other side, and it looks like they’re doing all they can to see what they have in terms of their in-house candidates.

"He's got a lot of athleticism." – Todd Bowles on rookie OLB Frankie Luvu who has been getting some starting reps in practice. #GoCougs

Luvu, an undrafted free agent out of Washington State, has managed to catch the attention of outside linebackers coach Kevin Greene, who has been heard several times during camp, screaming encouragement in Luvu’s direction, praising the rookie’s game.  After a collegiate career that saw Luvu pick up 8 sacks and nineteen tackles for loss over the past two seasons, he wasn’t selected in the 2018 draft, and the Jets hope they may have something in the 253 lb edge defender.

Meanwhile, Copleland has had seen a bit of action in the NFL as a member of the Detroit Lions where he was a special teamer and back-up linebacker.

While Luvu and Copeland have been getting some first-team reps, it’s another outside linebacker, Obum Gwacham who has found him self in the offensive backfield on a fairly consistent basis.  A little-known player, Gwacham has never started an NFL contest, but he did pick up 2.5 sacks as a reserve player with the New Orleans Saints back in 2015.

What makes Gwacham intriguing is that he seems to have the explosive traits you look for in an edge rusher that many other Jets linebackers lack.  In looking at his pre-draft numbers, Gwacham would actually have posted an explosion score of 68, just 2 points below the target of 70 which tends to be the number that scouts and GM’s look for when trying to gauge just how quick a player will get off the ball and in to the backfield.

With no established pass rusher on the roster and the likes of Lorenzo Mauldin and Dylan Donahue to compete with, keep an eye on this trio as one hopes to emerge as a factor for Gang Green in 2018.