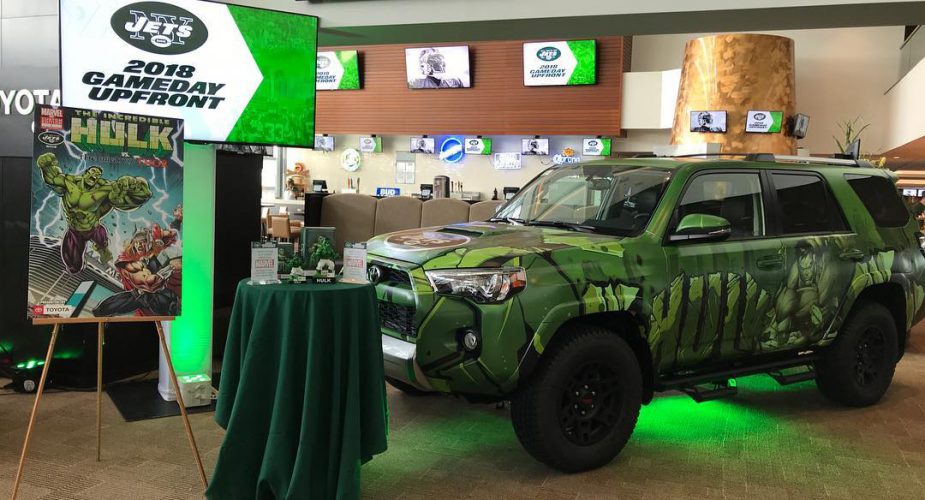 The New York Jets invited JetNation to Metlife Stadium this week for a behind-the-scenes look at the game day improvements they are offering this season. GameDay Upfront is an opportunity to showcase what is new in and around the team for the upcoming season. Here is the full press release from the Jets that highlights what you can expect for the 2018 season: 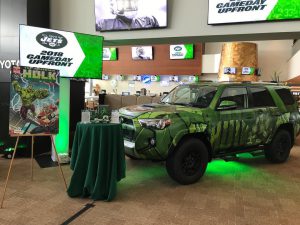 As an organization, the New York Jets have emphasized the importance of partnering with some of the biggest, most recognizable and innovative brands. These partnerships are ultimately created with the initiative of finding a way for fans to truly benefit from them. The Jets announced three multi-level partnerships: Def Jam, Marvel, and the WWE.

The partnership with Def Jam Recordings is a unique collaboration focused on four things: football, music, content and the in-game experience. Def Jam artists will be highlighted in football-focused videos that will live on Jets social channels. Additionally, a video content series featuring Jets players and Def Jam artists will be created. This partnership will also feature Def Jam producing new, exclusive music, such as a Jets team introduction song that is going to be heard during all home games at MetLife Stadium.

Marvel’s partnership with the Jets will highlight a variety of Marvel-themed features for fans at MetLife Stadium this season, including a Hulk vs. Thor themed Green Out, presented by Toyota, against the Minnesota Vikings on October 21st. Upon entering the stadium on this day, the first 15,000 fans will have the opportunity to receive a limited Hulk-themed bobblehead giveaway. The partnership will also feature the creation of two comic books; the first, a Hulk vs. Thor storyline, where a poster of the comic book cover will be given to all fans upon exiting the Vikings game. In addition, there will be a comic book written about Super Bowl III, celebrating the iconic championship’s 50th anniversary. Released in four chapters, the first part will be available through newyorkjets.com, the Official New York Jets App and Jets social channels on October 10th. The Jets partnership with Marvel is presented by Toyota.

The Jets will host Kids Day on 10/7 when they take on the Broncos. During the game, WWE Legends and Superstars will be at the stadium making appearances. There will also be kid-focused programming throughout the game, such as GenJets Kids Fest, a kid reporter, youth football games at halftime, a WrestleMania 35 ticket giveaway and a video board featuring player’s favorite moments and a kids-cam during timeouts.

To celebrate the 50th anniversary of Super Bowl III, the Jets announced a variety of elements that will be featured during the Jets vs. Colts game on 10/14. The celebration will include a dinner honoring the 1968 team before the game, a halftime ceremony, a special TV show on WCBS airing on the anniversary of the game (1/12/19), and a White Out where the team will wear white jerseys and white pants with grey facemasks to commemorate the championship team. At the White Out, fans will have the opportunity to meet and greet Jets Legends and Flight Crew Cheerleaders, as well as purchase Super Bowl III anniversary items. Super Bowl III celebration is presented by BankUnited, Pepsi, and ShopRite.

On January 12, 1969, the New York Jets forever changed the landscape of football, shocking the world with an iconic 16-7 victory in Super Bowl III. To honor the 50th Anniversary of this transcendent moment, the Jets have partnered with fifth generation Napa Valley winemaker Joe Wagner, who has crafted the premium California Red Wine. For more info, visit www.newyorkjets.com. Pre-sale begins August 23rd and will be available in stores the week of the first regular season game against the Lions on 9/10.

At all Jets home games this season, the Jets will be hosting a 50/50 raffle to benefit the Jets Foundation and various other charities. Raffle tickets can be purchased from pre-game, up until the end of the 3rd quarter. The winning number will be announced early in the 4th quarter and one lucky fan will win half of the raffle jackpot, while the remainder will go to charity. 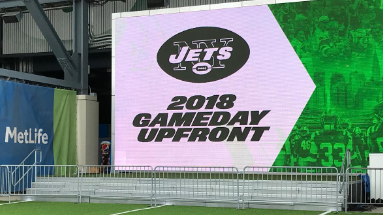 The Jets launched the second season of their Fan Hall of Fame, presented by IdentoGO. The program helps to recognize the New York Jets fan base and the appreciation the organization has for them. Applications were open for submission from Thursday, August 16th and will be available until Sunday, September 30th. Written statements of nomination can be submitted at newyorkjets.com/FanHallofFame. The 2018 inductees will take part in the second annual induction ceremony, which will take place at the Jets vs. Packers regular season home finale at MetLife Stadium on Sunday, December 23rd. Additionally, there will also be a display on the plaza at MetLife Stadium recognizing the 2017 Fan Hall of Fame members.

For the second season, hot dogs and 12 oz. sodas will be offered half price at all Frank’s locations for Season Ticket Holders. All fans can purchase value items including: hot dogs, chips, and soda meal for $7; a turkey wrap and fruit for $7; value pretzel, soda or popcorn for $3; value water for $2 and $5 value beers at the Bud Light Beer Garden and various locations throughout the stadium.