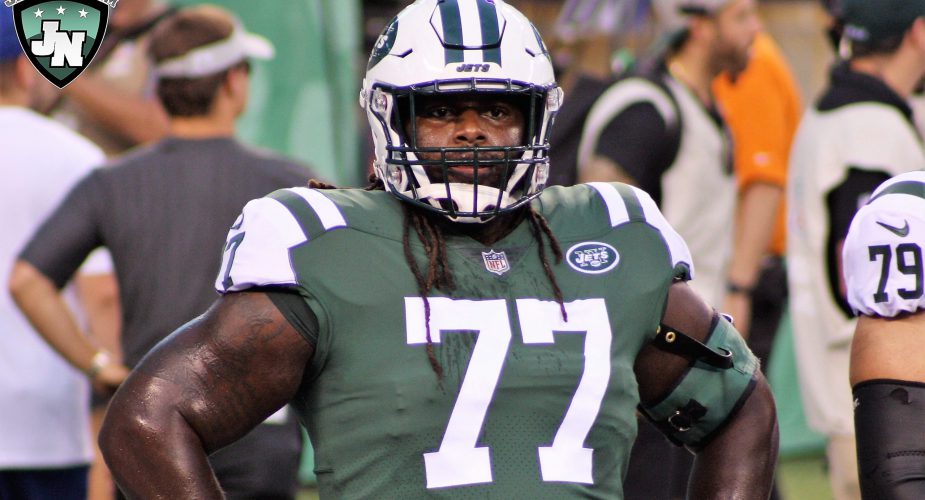 While much of the conversation surrounding the New York Jets in the wake of their week 3 preseason loss to the Giants has centered around who the team’s starting quarterback will be in Detroit on September 10th, another story line that isn’t getting nearly enough attention is how well the Jets interior offensive line held up against Big Blue’s defensive front, led by former Jet Damon Harrison. 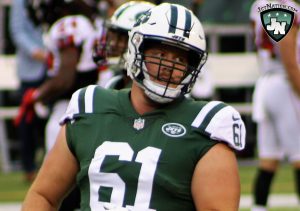 Spencer Long looks to upgrade the middle of the Jets offensive line in 2018.

As anyone who tuned in was able to see, most of the pressure Darnold faced came from defenders who were lined up against Jets back up right tackle Brent Qvale, (who was forced in to action at left tackle), against one of the team’s tight ends or as an extra rusher with no blocker to impede them.  Up the middle, it was a different story.

For the third consecutive game, left guard James Carpenter looked excellent in pass protection.  Carpenter and the rest of the starters played 39 snaps as a group, 22 of which were on pass plays according to pro football focus.  On those 22 pass plays, Carpenter didn’t allow a single pressure up the middle. On the same exact number of snaps, starting center Spencer Long surrendered 1 hit on Sam Darnold while right guard Brian Winters allowed just a single quarterback hurry.

James Carpenter currently owns the fourth-highest pass block efficiency grade among all NFL guards according to PFF at 86.6.

In looking at right tackle Brandon Shell just to get the full picture of how the starting offensive linemen performed, the third year tackle allowed one quarterback hit, but no sacks.  In fact, the only offensive lineman to allow a sack against the Giants was the aforementioned Qvale who was playing out of position in place of Kelvin Beachum.

Even when Darnold was feeling the heat against the Giants, it wasn’t necessarily because of poor blocking, but due to good coverage down the field.  For example, Darnold had almost 4.5 seconds to get rid of the ball on one of his throws for which he was hit with an intentional grounding penalty.  By NFL standards, that much time (4.43 seconds by our count) is more than enough to make a play.

Citing PFF data once again, it appears the Jets starting offensive linemen have allowed just 5 quarterback pressures through the Jets first three contests with Winters being tagged with three while Long and Shell have one apiece.

The fact that the Jets are running a west coast scheme with plenty of quick reads and rollouts will aid in keeping Darnold out of the crosshairs of oncoming defenders.  An offensive line that has played better than many expected early on is just one more reason why fans should resist the urge to press the panic button regarding the team’s pass blocking and embrace the fact that Darnold is the team’s likely week one starter behind a better than advertised bunch of blockers.