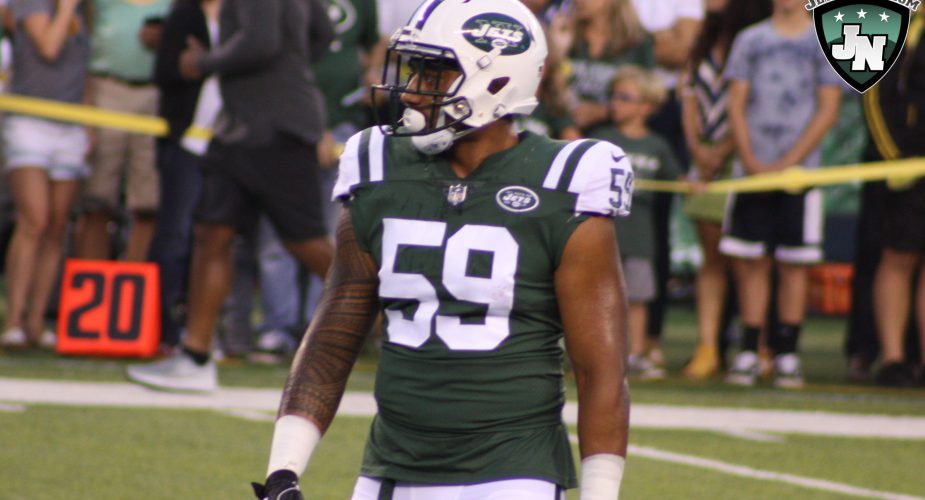 The Jets cut ties with 18 players yesterday and will have to part with 14 more today to get down to the league mandated 53.

The first names have started coming in today but none have been confirmed by the team at this point.  Check back to this article for updates throughout the day.

LB Anthony Wint: We projected Wint as a practice squad player in our 53 man projection as he made some plays in training camp and is very well liked within the building according to Manish Mehta of the New York Daily News.

Jets cut LB Anthony Wint, per source. Coaches really like him. Look for him to return to the practice squad.

K Taylor Bertolet: Jason Myers essentially won the competition against the Eagles when he was good from 58 and 43-yards.  Don’t be surprised if the Jets keep an eye on who else shakes loose.

OLB Frankie Luvu: A surprise cut as many thought Luvu had played well enough to earn a roster spot.

OLB Lorenzo Mauldin: The writing has been on the wall for a while with Mauldin.  He was a great story, but never hit his stride with the Jets.

RB Thomas Rawls: Rawls was a camp body who was worth bringing in for a look, but didn’t show much.

Deon Simon: Looked like he had a shot to be a solid pro but was downgraded last season with the addition of Mike Pennel and was a likely cut when Folorunso Fatukasi was drafted.

CB Jeremy Clark: A late round pick, Clark was injured for most of last season and showed very little this year.

TE Clive Walford: The way the Jets tight ends performed this preseason, a good one was going to get cut.  Walford was that guy.

S Brandon Bryant: Another deep position group meant Bryant was a long shot.  He did look good enough to get practice squad consideration.

WR Tre McBride: Possibly the most surprising cut thus far.  McBride had an excellent camp and performed well in preseason games but gets his walking papers.

WR Chad Hansen: A fourth round pick last season, Hansen was all but invisible during training camp.  We had him making our final 53 based largely on draft status as opposed to production.  Perhaps some growth from Mike Maccagnan to let go of his picks when they don’t produce.

Talk about all of the Jets cuts and other news here in our forums.