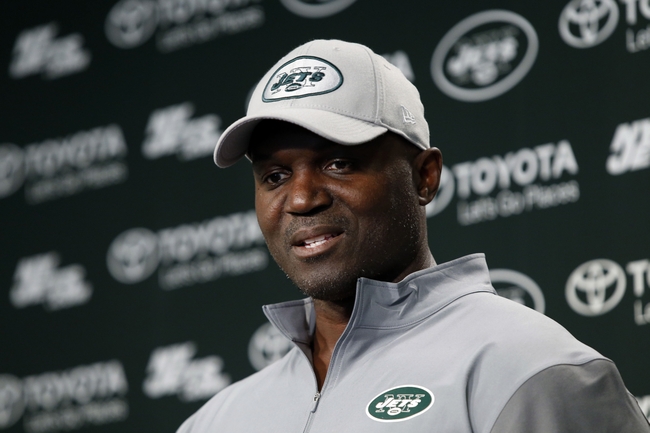 The New York Jets opened their 2018 season with a 48-17 throttling of the Detroit Lions on the road and there was no shortage of outstanding individual and group performances.  Let’s take a look at how we saw it.

The only reason this isn’t an A+ for rookie QB Sam Darnold was the interception he threw to start the game that the Lions brought back for an early lead.  Darnold wasn’t rattled in the least, coming back to play turnover free football while going 16-20 with a couple of touchdowns.  A fantastic debut for the third overall pick.

Isaiah Crowell highlighted the ground attack with a 62-yard touchdown run and Bilal Powell looked every bit as quick as he has over the past couple of seasons, carrying the ball 12 time for 60 yards.  In all, Crowell and Powell combined for 162 yards and 2 touchdowns, both by Crowell, on 22 carries.

The group lacks a “true number one”, but they showed tonight why they have the ability to be far better than many anticipate.  Quincy Enunwa led the way with 6 receptions for 63 yards and Robby Anderson hauled in a 41-yard touchdown pass.  Terrell Pryor had his first three catches as a Jet, picking up 39 yards.

The Jets deployed several multiple tight end sets, going with two to three on several occasions.  The blocking the Jets got out of the group played a big role in the success of the running game, and when called upon, they did their part in the passing game.  Neal Sterling had 3 receptions for 27 yards and Eric Tomlinson hauled in 1 catch for seven.

For all the talk this offseason about how this was going to be arguably the worst group of blockers in the NFL, their performance tonight far exceeded what so many thought they would be capable of at any point this season.  Darnold was sacked just twice and for the most part had the time he needed to throw.  On the ground, as mentioned above, the Jets top two backs ran for 162 yards on 22 carries.  The presence of Spencer Long in place of Wesley Johnson was a huge factor.

No sacks for the D-line, but Henry Anderson and Leonard Williams were factors all night long, consistently pressuring Matthew Stafford.  Steve McLendon also did a few things that don’t show up in the box score as he blew up several players that freed up Jets defenders to come streaking in for tackles for loss.

Working together with the D-line, the Jets held Detroit to just 39 yards on fifteen carries.  The linebackers were clearly a big reason for that as rookie Frankie Luvu impressed early on, and Darron Lee may have had the best game of his career, coming away with a pair of interceptions, one of which was returned for a touchdown.  As was the case with the D-line, there were no sacks, but the ball was coming out quickly for the most part and there was a fair bit of pressure put on the Lions quarterbacks.

Yes, another A+.  Aside from one drive in which the Lions carved up the Jets on a quick scoring drive, the Jets secondary was fantastic.  Interceptions for Trumaine Johnson, Morris Claiborne and Jamal Adams contributed to the Jets’ five interceptions.  Yes, five interceptions in one game after coming away with just 11 through all of last season.  Adams also had a jarring hit near the goal line that saved a touchdown at one point.

Never thought we’d see a dominant performance like this from the current group of special teamers, but Andre Roberts averaged 45 yards per return on 3 punt returns, highlighted by a 78-yard touchdown.  Lac Edwards did another nice job as a punter, dropping two of his three kicks inside the 20, and Jason Myers was 2/2 on his field goal attempts, 6/6 on extra points and consistently boomed his kickoffs in to the Lions end zone.

For the most part this was a fantastic effort from the Jets coaching staff, particularly on defense where they intercepted five passes, four of which came against one of the game’s better QB’s in Matt Stafford.  The team dialed it back just a bit after Darnold’s first interception, but they didn’t get to the point where they were coddling him and they let him throw the ball down the field a bit.  Jeremy Bates had what was probably the worst call of the day when he called for an end-around on third down that resulted in a five-yard loss, knocking the Jets out of field goal range.

Jets fans couldn’t ask for a better start to their 2018 season, and while it’s only one game, it’s certainly a heck of a performance to build on as they head home to play the Dolphins at MetLife Stadium this week.