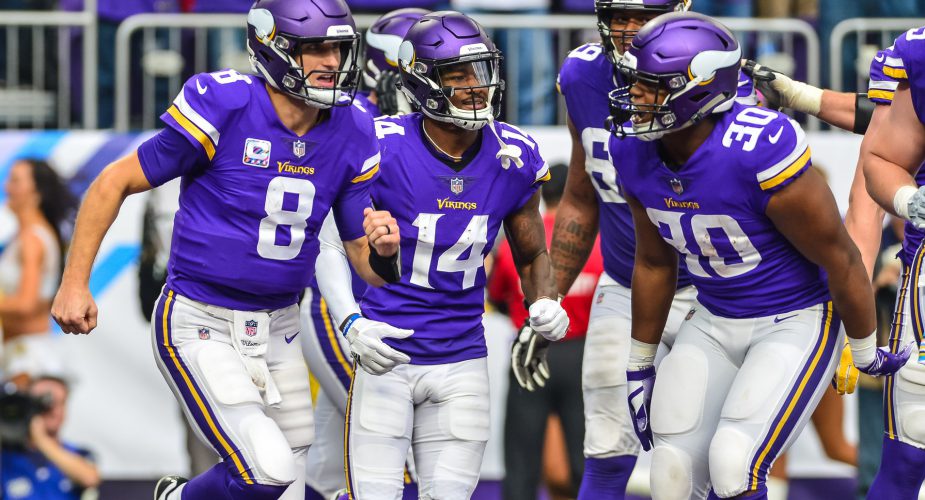 Finally, the Jets did what I said they would do! With regards to my football predictions over the last few weeks, the New York Jets have been like a group of recalcitrant children. But thanks last week’s pick came true thanks to Jason Meyers 24 points between the uprights. All of those who back Gang Green at top sites like Intertops made a few bucks in Week 6.

But can the boys in white and green do it again … against a tougher opponent in the Minnesota Vikings? The Vikings have been listed as 3.5-point favorites and the total opened at 47.

The Minnesota Vikings don’t come to Jets’ territory often. And when they do, they have a history of getting repelled; driven back from the walls of East Rutherford to paddle their little purple longboats back to their little purple land with their purple helmets weighing heavily on their necks … heads hanging in the shame of defeat.

In the three times that the Vikes have visited the Jets since 1997, they have lost all three affairs and only covered the spread once. But the truth is, it’s an empty seat because the last time the Vikings came to town was 2010. That was ages ago, and the only guy on the Jets that was there back then is the dude who holds the first-down marker.

Both of these teams are coming off of back-to-back wins. Latavius Murray really shined with his 155-yard performance against the Arizona Cardinals last week, but we should expect a repeat performance. The Cardinals are terrible at stopping the run. They are second-worst in the league, allowing 151 per game on the ground. And Captain Kirk has steered the Starship Vikaprise into trouble a few times. He has lost the ball five times through fumble and tossed three picks so far this season. This bodes well for the Jets because they have been marvelous at creating turnovers in MetLife.

Darnold is coming off of a great game, dropping 280 passing yards and two TDs on the Colts. But like I said in that preview, Indianapolis is beat-up bad with injuries, and their secondary isn’t that great, to begin with. That said, the Vikings are only 20th against the pass. So their uber-elite defense doesn’t extend that deeply into the third level. In fact, their defense is not the top-five D that everyone thought it would be. And now it seems the Vikings beat-up defense may have just lost Mike Hughes, so they will be even weaker at corner. However, they are still dangerous a dangerous team, and we have seen Gang Green completely fall apart once an opponent is successfully challenging the Jets up front.

My official pick is to stay away from betting this game. The total has moved down from 47 to 46.5 despite the fact that everyone is betting the over. That smell fishy to me. I wouldn’t touch the total with a ten-foot pole. It could turn into another game of miscues that ends up low-scoring, or we could see a repeat of two QBs lighting up each-other’s relatively soft secondaries.

I feel like the Jets are going to come out and play some inspired ball, so If I had to make a play, I’d take the Jets getting three-and-a-half points. They are 9-3 against the spread at home, and do have a history of beating the Vikings. So, they have a shot at pulling off a great upset on Sunday.