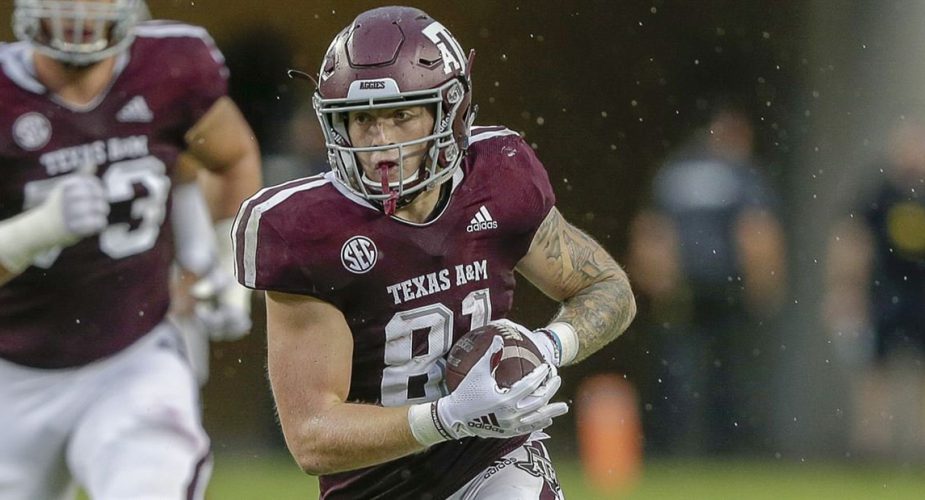 After plugging holes through free agency and a trade that netted All-Pro left guard Kelechi Osmele, the Jets will look to round out their 53-man roster in a few weeks when they head to Tennessee for the NFL draft.  One position that the Jets could have in their crosshairs is tight end where the team is set with their starter in Chris Herndon, but little else in terms of proven commodities behind him.

When asked where he saw the most depth in this class when meeting with the media in Indianapolis, Jets GM Mike Maccagnan pointed to tight end as a group that stood out to the organization.  With that in mind, might the Jets try to snag another tight end if a good one falls to the middle rounds?  If so, one candidate should be Texas A&M product Jace Sternberger.

Sternberger has shown excellent hands at times and is a tough runner to bring down after the catch as defenses routinely needed more than one defender to bring him down.  Sternberger also does a nice job of pulling the ball down with a defender oh his hip, or as is the case below, with one pulling on his jersey.  Offers versatility as a player who has been used as a TE, out of the slot and as an H-back.  Could contribute immediately as a red zone target.

@Aggiefootball TE Jace Sternberger came up on @JetNationRadio this week as a player who seems to have the experts torn. Have seen him mocked as early as round 2 and as late as round six. Makes the TD grab here despite defender tugging on jersey as he turns to locate the ball. pic.twitter.com/AkBQMDTvJv

Not as strong as you’d like as a blocker when lined up tight to the formation.  Speed will limit number of big plays in the passing game.

Given the fact that Sternberger can line up and hold his own in multiple spots, Adam Gase would surely be able to find a way to get Sternberger contributing to some degree on offense with the long-term potential of being an every down tight end.

Sternberger has reportedly caught the attention of the Packers, Vikings, Lions, Cowboys and Patriots.  Matt Miller of Bleacher Report has him going in round five, whereas Pro Football Focus has him being targeted by the New England Patriots in round 1.  USA Today draftwire lands somewhere in the middle with Sternberger going 69th to the Jacksonville Jaguars, one pick after the Jets at 68.