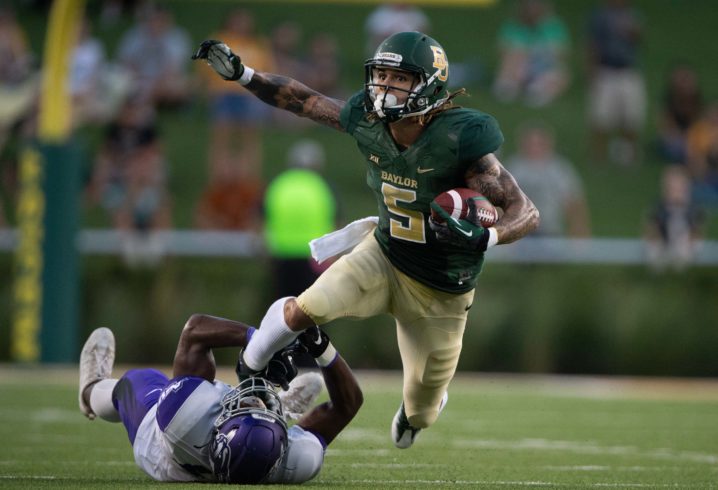 As the NFL draft draws closer, JetNation.com will continue to preview draft prospects who could potentially fill one of the many needs the Jets have on their roster.  In this breakdown, we’ll be looking at a player who isn’t getting nearly enough attention in the pre-draft process in Baylor wide receiver Jalen Hurd who visited Gang Green earlier this week.

Interesting 6-5, 228-pound prospect who spent his first three seasons as a running back at Tennessee. pic.twitter.com/02iSE0iEsu

Hurd was originally running back at the University of Tennessee where he ran for 1,285 yards and 12 touchdowns in 2015 before eventually transferring to Baylor following the 2016 season.  At Baylor, Hurd was converted to wide receiver for his final collegiate season and impressed, pulling down 69 passes 946 yards and four touchdowns.

Here are all of Jalen Hurd's receiving touchdowns in 2018. Underrated prospect. pic.twitter.com/bDqbX0JR2m

Unlike many past players with positional versatility, Hurd is more than just a gimmick as he put up impressive numbers at two major programs at both running back and wide receiver.  He didn’t run at the combine in Indy but he has been rumored to run in the 4.4’s.  As a powerful player who can line up in a variety of spots, he would make an ideal mid-round selection.

As one might expect for a player as raw at the position as Herd, his route running leaves a bit to be desired, but this is something that he may be able to improve over time.  Effort as a blocker lacks consistency.

There’s not a coach in the NFL who shouldn’t be able to find a role for Hurd in their offense and Adam Gase is no exception.  A coach who is expected to do a far better job of putting offensive players in position to succeed, Gase could utilize Hurd as a red zone target early on while letting him pick up some short yardage carries out of the backfield.