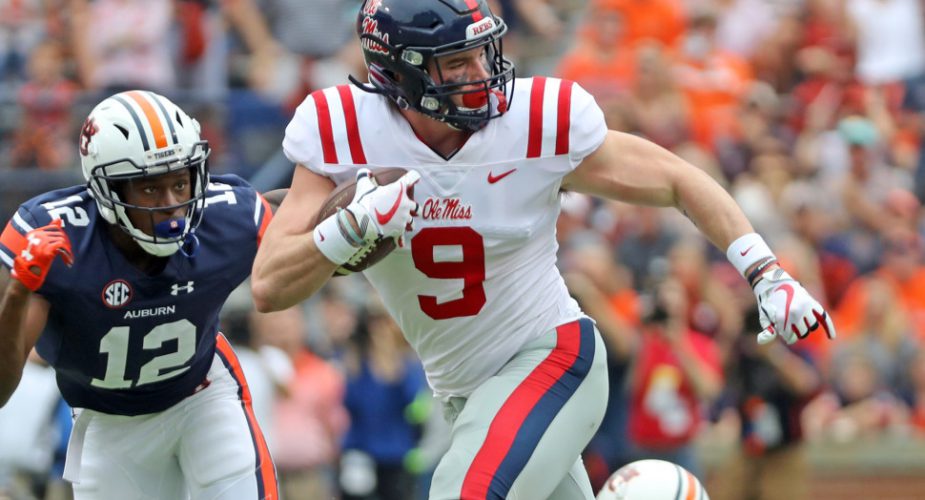 With the NFL draft just around the corner as it’s set to kick off on Thursday, April 25th in Tennessee, the Jets continue to host prospects and JetNation.com will continue to preview prospects that could be targeted by Gang Green once Mike Maccagnan and company are on the clock.

In this article, we’ll preview Mississippi tight end Dawson Knox.  As we’d mentioned in our Jace Sternberger preview, the Jets don’t have a dire need at tight end due to the presence of Chris Herndon.  However, anyone who would object to adding another big, reliable target in the middle of the field for Sam Darnold might be out of their mind.

Can stretch the field vertically with 4.51 speed and excellent hands.  In watching Knox in action, you’ll find a player who can expose linebackers and safeties running up the seam, but who can also catch the ball underneath and hold on despite taking some big shots.  Impressive 18.9 YPC in 2018 highlights what he can do down the field.

Mississippi TE Dawson Knox shows the ability to hold on to the ball despite contact arriving almost instantaneously on several plays we saw. Here's one against Mississippi State on a short gain over the middle. pic.twitter.com/2KNhZbumqJ

There are those who feel Knox will be gone by the time the Jets have a shot to grab him, but if he’s there for the taking, the Jets would have to consider it.

Struggles when asked to block in open space as an H-Back or motion tight end, often ending up off target and off balance.  Production wasn’t very impressive at Mississippi lots of big time targets in place and only so many plays to go around.  Long speed is better than short game with little explosiveness.