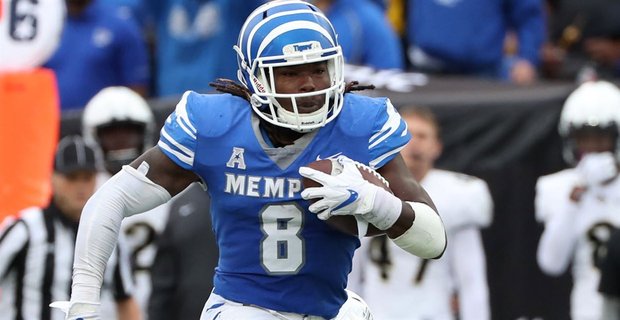 Less than one week away from the 2019 NFL Draft, the big board for the New York Jets likely set. Off-season workouts are underway and speculation regarding the Jets pick at number three overall is rampant.  Will they take a top three player on their board, or is a trade down in the cards?  We’ll have to wait and see, but if the Jets do add some picks, a running back may be in the cards.

This year’s class features a heavily-tooled group of young running backs. Although they went out and signed former Steelers running back Le’Veon Bell to a 4-year $52 million deal last month, they still need to address the position for depth and a potential starter when Bell departs in a few seassons.

Memphis running back Darrell Henderson looks to be a complimentary piece with Bell. He has all the traits as a runner, and has great potential in the passing game, as well as special teams. He dominated his entire junior season, racking up over 2,200 yards and 25 touchdowns from scrimmage, finishing second in the FBS in rush yards. That combined with placing top ten at the position in every combine drill he participated in, Henderson may be a hot commodity in late April.

Henderson has the ability to be the best running back in this class. He is a physical runner who has sub 4.5 speed to take any hand off the distance. With only 4 fumbles in his entire collegiate career, Henderson is not in danger of putting the ball on the turf. After averaging 19.5 yards per return, Henderson could play a predominant role on special teams as well. His explosion is off the charts and has all the makings to have a prolific NFL career as a starter. Quickness and shiftiness is the name of his game, but Henderson is not afraid to welcome defenders, then most likely falling forward for more yards.

Although he caught over 60 passes in college, his ability as a pass catcher is somewhat unknown, and it is unsure if he can be a reliable check down target. He may struggle when he stays in as a blocker, but his strength may help improve that aspect of his game. Running outside the tackles is a bit of a problem for Henderson, as his burst and quickness to and through the hole showcases his talents better.

Paired with Le’Veon Bell, Henderson could add up to what might be a dynamic duo. Their running styles compliment each other well, and he could be split out wide as a receiver if need be, giving Darnold more options in the passing game. He could also contribute as a return man where the Jets expect to have plenty of competition. If he were to slide into the third round, the New York Jets could consider the well-rounded back at pick 68. Henderson may have the highest ceiling of all running backs in this class due to his size and versatility.