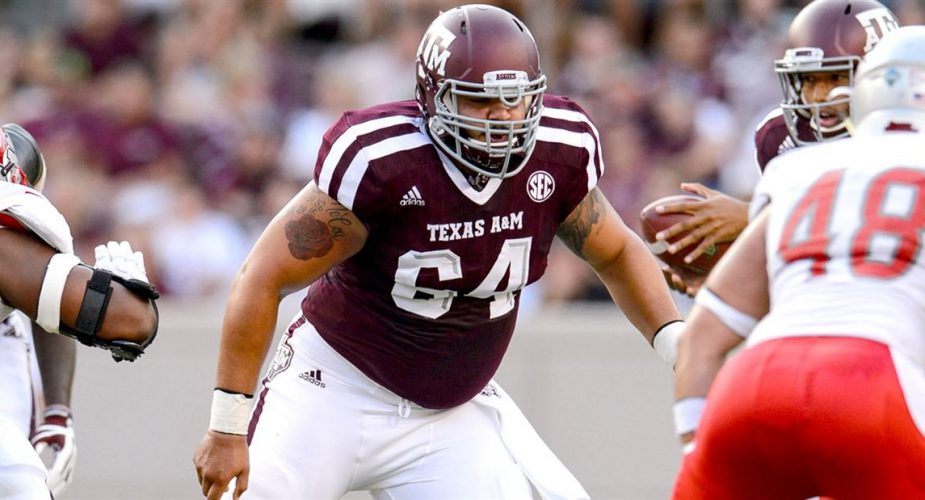 Every year, the NFL Draft increases its popularity, so much so that it has become a national spectacle for television viewers. Countless hours of analysis and mock drafts, all in preparation for one weekend in April. Draft stocks of players are constantly rising and falling, and as team visits finish up, we start to see a clearer vision for Day 1 in Nashville.

One of the hardest positions to project this year, however, is the offensive line. While many media analysts struggle to rank the linemen in this class, one name has remained near the top of the list on the interior is Texas A&M center Erik McCoy. The redshirt junior was a team captain that started in all 38 games he played in.

With only three picks in the top 105 selections of the draft, New York may be looking to trade back to recoup some of the picks spent last year to go up and take Sam Darnold. Will offensive line be a major focus point for the Green & White? If so, could Erik McCoy be the answer at center after they failed to address that spot in free agency? Currently, the position is occupied by Jonotthan Harrison, so New York must do all they can to replace him or at least create competition heading into training camp.  Should they choose to do so, McCoy would have to be a legitimate option.

McCoy should be a Week 1 starter for whichever team he is drafted by. Not only is he a physical player, but he also possesses superior speed compared to the other linemen in this draft. His quick hands allow him to establish his block after snapping the ball, with strong legs and core allowing him to maintain the block throughout the play. McCoy has the ability to be a good pulling lineman which is something the Jets have missed in recent years.

Although McCoy displays excellent speed, he posted one of the slowest 3-cone times at the position. This will not bode well for him at the NFL level, where he will be tasked with blocking much more athletic, agile defenders. His hand techniques will also need improvement, as he struggles with initial placement. Having long arms suppressed this flaw in college, but if he can refine his game, he has the making to be a Pro-Bowl caliber lineman.

.@AggieFootball C/G @Erik_McCoy_73 in #seniorbowl reaching and sealing Auburn NT Dontavius Russell…not easy to do. Started all 38 games. NFL scouts have conviction on him because he held his own vs. 1st rounders Q. Williams, J. Simmons, and C. Wilkins. He’ll start as rookie. pic.twitter.com/OKfh6ht9EU

Many teams may be scrambling come draft night, moving up and down the board hoping to land the perfect prospect. If the Jets do successfully complete a trade to move down from 3, they must look at offensive line with the extra picks they gain. Since it’s unlikely McCoy will be available when they pick at no.68, a pick in the middle of the second round may be enough to score big with a potential anchor. Other zone blocking offenses that McCoy may be a potential fit for are the Packers, Seahawks, Chiefs and Saints.

If McCoy goes as early as some predict, the Jets will be forced to look elsewhere, but as you can see from the projections above, he’s viewed by some as not only being on the board, but the Jets pick at 68.