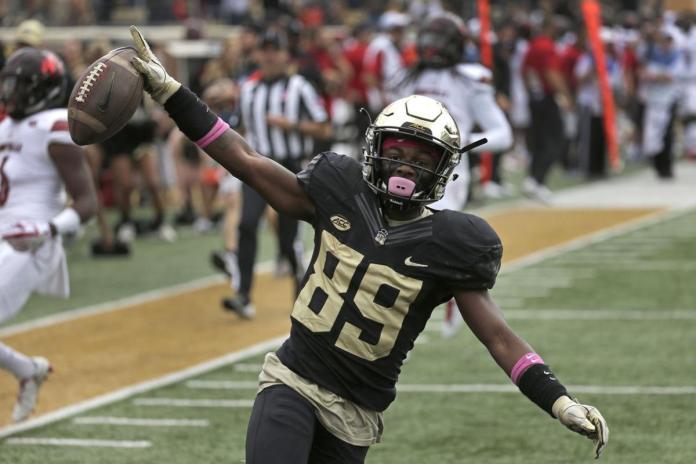 As the names of undrafted free agents begin rolling in for the New York Jets, we’ll be taking the time to review as many of them as possible as extensively as possible, and one player that has jumped out right away is Wake Forest wide receiver Greg Dortch.

Undrafted perhaps due to his size (5′ 7” 173), the diminutive receiver would have almost certainly heard his name called during the draft if only he’d been a few inches taller and a few pounds heavier.  “I was talking to a scout from another team this week who was fawning over him like he was Wes Welker” was how New York Daily News reporter Manish Mehta responded to a question about which undrafted free agents fans should be keeping an eye on as a guest on JetNation radio.

Greg Dortch fields the draft class' highest receiving grade since 2017 from the slot – he's on our list of pass-catchers to watch for Day 2 of the #NFLDraft (via @PFF_Cam)https://t.co/KnJQBXYqI2 pic.twitter.com/CHEVFCcEpe

During his time at Wake Forest, Dortch accounted for over 30% of his team’s total yards as he racked up 1,800 yards and 17 touchdowns over the past two seasons as a receiver.  As a return man, Dortch added over 1,000 combined yards on kicks and punts, bringing a pair of punts all the way back for a score.

One would have to assume his primary competition for a roster spot will be Deontay Burnett when training camp opens up.