Changing of the Guards Coming for Gang Green in ’19?

Given the poor overall performance of their guards in 2018 and 2019, the Jets made huge strides in fixing the position by acquiring all-pro left guard Kelechi Osemele earlier this offseason.  His arrival is expected to be an immediate and dramatic improvement over the departed James Carpenter.

That only fixes half of the problem, however.  Right guard Brian Winters is a serviceable veteran who does a good enough job in pass protection, but is too inconsistent as a run blocker to be viewed as a player who is a lock to win the starting job in 2019.  Due to count for $6.5 million against the salary cap, parting ways with Winters would refund the team 100% of that money.  This should mean some fierce competition at right guard come training camp.

So who are the candidates who could push Winters?  There are a few intriguing names and a handful of lesser-known players who have plenty to prove, themselves.

Tom Compton: The free agent addition should top the list of possible contenders.  Undoubtedly more agile than Winters, Compton, who started 14 games for the Vikings last season, could be a better fit than Winters if we see a heavy dose of zone blocking in 2019.

Brent Qvale: Some may see Qvale as an unconventional option, but he played guard in college and has filled in for a couple of games as a pro.  As a matter of fact, Qvale’s two starts at right guard in 2016 earned him his two highest grades of the season per pro football focus at 70 and 68.5, considered “average” by PFF standards. 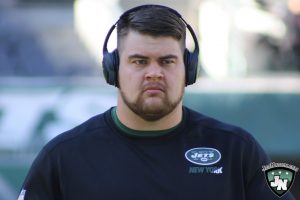 Brent Qvale has spent time at guard and tackle with the Jets.

Chuma Edoga: A candidate to become the team’s eventual starting left tackle, Edoga could get a look on the right side of the O-line in his rookie year.  A competition with Brandon Shell at right tackle is expected, but if he loses that battle, he could kick inside to gain some game experience and offer the potential of a better all-around player than Winters.

Jordan Morgan: In Morgan, the Jets hope to have snagged a late bloomer.  Drafted in the fifth-round of the 2017 draft out of Kutztown, Morgan has struggled with the adjustment to the pro level, but he has terrific size for the position and could get an extended look in training camp.

Ben Braden: A third-year undrafted free agent out of Michigan, Braden did enough under the team’s previous regime to stick for around for a couple of seasons.  A player with a reputation as a mauler in the run game, Braden’s lack of athleticism may prevent him from taking Winters’ spot.

Tyler Jones: The undrafted rookie free agent out of NC State who was one of the top pass blockers in the country at right tackle is listed on the Jets official site as a guard.  A look on the right side would make the most sense.

If a new regime can light a fire under Brian Winters, any of these contenders will have a harder time displacing him, but if the Jets get more inconsistent football out of the veteran guard, Winters could be going.