With Jets training camp just around the corner, we continue to preview each position group as the team gets revved up to kick off the Adam Gase/Joe Douglas era.  Today, it’s one of the more suspect groups on the roster in the offensive line.

The 2018 Jets offensive line was tied for 14th in the NFL is pass blocking efficiency per pro football focus but the team was one of the worst run blocking units in the NFL.  A pair of new starters and some additional new faces will look to help improve in both areas in 2019.  Here’s a look at the current O-line in its entirety. 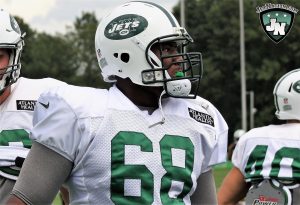 Kelvin Beachum will be responsible for Sam Darnold’s blind side once again in 2019.

We’ve been saying the same thing about Beachum for over  a year now.  He’s an average to slightly above average pass blocker whose run blocking could use improvement.  A middle of the pack player making middle of the pack money.  In the final season of his deal, Beachum will likely give way to a new starter in 2020, but his character is impeccable and he’s an excellent model for younger players to learn from.  He’s a perfectly suitable “hold the fort” player for another year.

A former All-Pro left guard who was made available via trade due to a bloated salary and in injury-plagued 2018, Osemele is expected to be one of the biggest upgrades on the roster as he replaces the departed James Carpenter.

Harrison filled in admirably at center toward the tail end of the season and held his own at the pivot.  A player whose athleticism could make him an ideal fit for Adam Gase, Harrison will never be an upper echelon player, but he should certainly be an upgrade over what the Jets started each of the past two seasons with in Wesley Johnson and Spencer Long.  This is also a position the Jets could look to upgrade via trade or free agency before the season kicks off.

Winters is pencilled in as the team’s starting right guard, but don’t be shocked if he loses that job at some point.  Free agent addition Tom Compton is a more athletic player than Winters and Adam Gase may not be willing to put up with Winters’ inconsistency at the position.  Another player who is a better pass blocker than run blocker, Winters’ $6.5 million cap savings if cut could work against him if another player performs to a similar level.

Shell is another player who could be on a short leash this season.  He’s been a solid player since entering the league, but lacks the mean streak you’d like to see in an O-lineman.  With the addition of USC product Chuma Edoga, don’t be surprised  if Shell gets pushed aside at some point should Edoga progress quickly enough for the team’s liking. 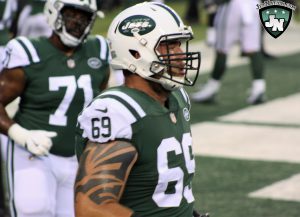 Ben Braden prepares to enter year three as a pro.

Braden enters his third pro season after signing with the Jets as an undrafted free agent out of Michigan a couple of seasons ago.  Braden has a reputation as a mauler who struggles in pass protection.  If he sticks with another regime, it will bode well for the big guard.

A free agent addition who has played both guard and tackle at the pro level, Compton should be given a shot to steal the right guard job.  Will Adam Gase and company give him that chance?  Only time will tell.

Likely drafted with a vision of moving him to left tackle at some point, Edoga will likely get most of his work as a rookie on the right side of the offensive line.  A look at right guard should be a possibility.

Jones was one of the better pass blockers in all of college football as on offensive tackle but shows up on the Jets official roster as a guard.  A position switch was predicted by some experts and that looks to be the case early on.

Another undrafted free agent, Lobendahn’s versatility may be what gives him his best chance to land a roster spot.

An intriguing prospect who played both left and right tackle at UCF, Miller is another player who could find himself auditioning on the inside and outside.  Very durable player with a good motor.

A small school prospect entering year three, the Jets are hoping Morgan will come in to  his own after being cut loose by the Chicago Bears.

A solid veteran back up, Qvale has been a spot starter for the Jets at both right tackle and right guard.  With a new regime and several offensive tackles competing for depth spots on the roster, Qvale could have his work cut out.

A little-known player who has made the rounds in the AFC East, Smith is a player with whom Adam Gase will be familiar.  It was under Gase that Smith made the Dolphins 53-man roster in 2017 at right tackle, but was eventually let go before spending a brief time with the Patriots.  Smith was eventually signed away from the Patriots practice squad to the Jets active roster.

Toth bounced on and off of the Philadelphia Eagles practice squad before signing with the Jets in December of 2018.  A stout run blocker who excelled at the University of Kentucky, pro football focus mentioned Toth as a player who has the potential to one day become a starting center.  A strong showing at the Senior Bowl had some mentioning Toth as a possible mid-round pick.  In the end, he went undrafted and looks to show he belongs this season.