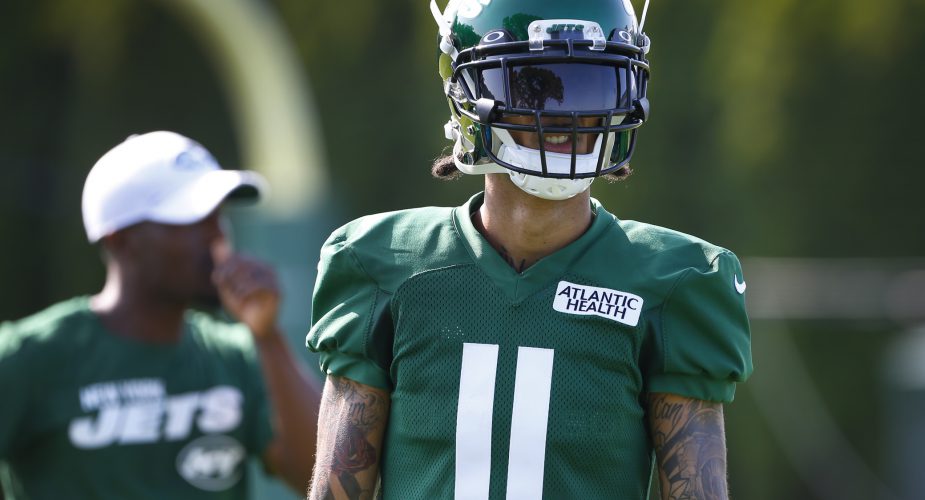 With training finally underway, our JetNation positional breakdowns continue with one of the most pivotal positions on the roster, wide receiver. A lot will be riding on this unit to help Sam Darnold make the second year leap, so they will need to play well during the 2019 campaign. While there are a few names everyone is familiar with, there are a few additions and depth chart guys that will gather attention as training camp rolls around next week. Here we will break down the position and talk about all the weapons the young quarterback will have at his disposal.

Last year, the Green & White’s top three receivers only combined for 1,572 yards. For comparison, the league’s leading receiver in 2018, Julio Jones, had 1,677 yards by himself. Improvements were made this offseason with the addition of Jamison Crowder, a highly touted slot guy from Washington, and Josh Bellamy, a versatile sleeper from Chicago. Expectations are a bit higher this year, as Adam Gase’s new offense should allow for Darnold to get the ball to his receivers faster, so production is a must from this unit.

Robby Anderson – The fourth year UDFA is primed for a breakout season in 2019, one Jets fans have been awaiting for two years now. He will have plenty of opportunity to prove himself early and often. He is a dangerous vertical threat, and his hands are better than most give him credit for. Robby may already be a top 5 deep threat in the league, which may rise up the ranks as the season unfolds. Although only having 752 yards last year, he was still able to score on 12% of his receptions. It is likely he will eclipse 1,000 yards this season and emerge as the number one target for Sam Darnold in Gase’s offense.

Quincy Enunwa – He has battled injuries in the past but Enunwa is healthy entering training camp. This year he is looking to solidify his role in the offense. Last year, he saw a lot of screen passes and plays that required him to gain a lot of YAC. This season, head coach Adam Gase will look to utilize Quincy is different ways. With the 4 game suspension looming over tight end Chris Herndon, it is possible we see Enunwa playing a bit of tight end to start the season. This will also allow for multiple receiver looks that will confuse opposing defenses. Enunwa should be a main contributor to this team going forward, his versatility is something the Jets don’t have much of.

Jamison Crowder – A new addition from the Washington Redskins, Crowders brings versatility and dynamic play making ability to Florham Park. Last year he totaled 29 receptions, 388 yards and 2 scores in 9 games, before an ankle injury ended his 2018 campaign. Jamison looks to be the Green & White’s starting slot receiver, and it’s not hard to see him finishing the season with the most receptions on the team.

Deontay Burnett – Burnett was a rookie out of USC in 2018, and his natural chemistry with Sam Darnold was on display in limited action. He only had 10 catches for 143 yards, but he is good depth option in the offense. He will also look to make a big jump in Year 2, setting up to be a good young duo for years to come. For now, he will compete for a prominent backup role.

Josh Bellamy – Another addition from the free agency period, Bellamy comes to New York from Chicago after spending the last 5 seasons with the Bears. He has experience on special teams as a return man, so he will compete for multiple spots on the roster. He brings a veteran presence to a young core who can turn into a reliable receiver down the stretch.

Charone Peake – A career depth player, Peake is entering his 4th season with the Jets. He only has 22 career catches, so he will go into training camp with a lot to prove. He is strong on special teams but Peake is a player to watch on the roster bubble, who may be replaced before the start of the regular season.

Greg Dortch – An UDFA out of Wake Forest, Greg Dortch is another option on special teams. He returned 2 for touchdowns last season, on his way to becoming an all-American specialist. He will have plenty of opportunity throughout camp to seize the starting return man job in New York.

Quadree Henderson – Henderson will compete for a specialist role alongside Dortch and Bellamy. He was an undrafted free agent last year and has spent time with the Steelers and Giants.

JJ Jones – Jones played for the Los Angeles Chargers last year, entering the season as their primary return man. He had a 72-yard return touchdown for them in preseason, but after that he was waived in October 2018. More competition for Brant Boyer to maintain a top special teams unit in 2019.

Jeff Smith – Another UDFA in 2019, Smith is a long shot to make the roster. He will likely end up on the practice squad, but he will have an uphill battle ahead of him.

Deonte Thompson – A 7-year journeyman, Thompson joins New York as his 5th career team. He had three previous stints with the Buffalo Bills, as well as the Cowboys, Ravens and Bears.

Tim White – White only has one career reception for 14 yards. He will be buried on the depth chart during camp and is not likely to make the 53-man roster.

There is a lot to look forward to and the wide receiver position will be a huge component towards their success in 2019. A lot of new energy in Florham Park to be excited about this time of year.