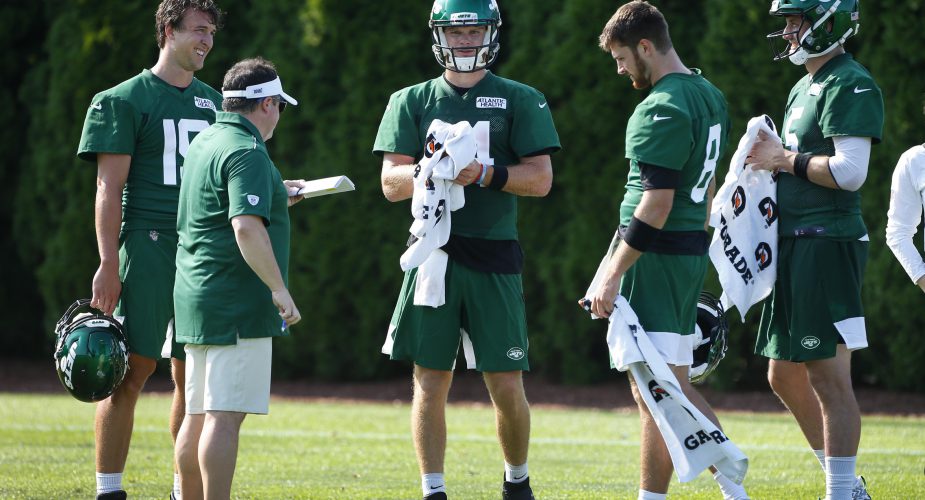 It was another hot but beautiful day at Jets Camp in Floram Park, NJ.  The tempo of practice was increased today with situational football that began with 7 on 7 then broke off into individual drills.  After that it was 11 on 11 game like situations.  This should bode well for the backup players who will take the field this upcoming Thursday 8/8 against the New York Giants.  Smart move by Adam Gase to let the depth players get as many reps as possible because they’re going to need it! Especially with the numerous flags and pre-snap penalties that flooded the back half of the practice.

Not all was bad as there were may exciting moments from the play maker’s Ty Montgomery, Greg Dortch and Trenton Canon.  Trevor Siemian had nice afternoon going through his reads and making the right choices, not all his passes were completed but he showed enough competence to validate being 2nd on the depth chart right now.

Here are some notes from today’s practice:

Harvey Langi has been flying around the field and had a sack today, worth keeping an eye on as he might be a sleeper to make this roster.

Parry Nickerson was featured as a Nickel cornerback and is trending in the right direction.

Quincy Enunwa had some trouble catching the football and put the ball on the ground twice for would be first downs.

The offense used multiple dual running back sets with Ty Montgomery and Le’Veon Bell.  Each of them motioned around to keep the defense guessing. I can see this becoming the Jets most effective offensive formation.  They looked unstoppable during the 2nd series as Montgomery had three receptions during this drive including a touchdown, which was setup by a nice run from Bell.

Ty Montgomery continues to show he’s the Swiss Army knife of this offense.  He lined up all of the field and had 5 receptions with 1 touchdown.

Jachai Polite created some pressure today but still has a long way to go and will need to flash in the preseason.

Jamison Crowder continues to find open areas in the field, making himself an easy target for Darnold.

Chandler Catanzaro kicking troubles continues today missing extra points and pushed a field goal to the right, he had enough leg but wasn’t on target.  I wouldn’t be surprised in competition was brought in next week.