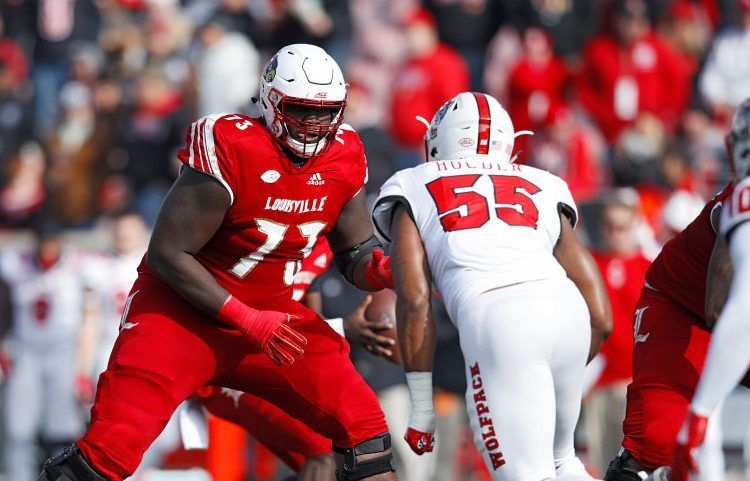 As any NFL fan is well aware, once the college bowl season comes to a close and the offseason pre-draft process begins, prospects will rise and fall based on All-Star games, pro days, combines, medicals and player interviews.  At the moment, it seems the players most are projecting to the Jets are the top three left tackles (Andrew Thomas of Georgia, Jedrick Wills of Alabama and Tristan Wirfs from Iowa) or one of the top two wide receivers (Jerry Jeudy of Alabama and Cee Dee Lamb of Oklahoma).

The Jets would likely grab any of those five players with the 11th pick, but it’s not out of the question that they’ll all be gone when the Jets are on the clock.  If so, the Jets will have to consider another option.  Here are four players who could find themselves climbing draft boards and going to the Jets with a strong pre-draft showing.

A behemoth at left tackle, Becton checks in at 6′ 7” 370 lbs and on film looks to move like a much smaller man.  Given the value of the position and the run we’ve seen on left tackles in recent years, expect Becton to enter the conversation as an early to mid first round pick.  If the Jets are truly putting Sam Darnold’s safety first, Becton could get the call.

Chaisson looks to be projected after the Jets pick at 11 in every mock we’ve seen up to this point.  Given their need for a true edge rusher, the explosive Chaisson should be an option.  He flashes an impressive spin move to go with his explosiveness terrific motor.  Jets fans don’t want to see defense in round one, but if all of the top O-line prospects are gone, Joe Douglas may go in another direction.

While Jerry Jeudy is getting most of the attention at this point, Ruggs might be the best deep threat in this class but can also run an assortment of routes.  Said to be a legitimate 4.2 speedster, Ruggs could fit in nicely as the Jets look to add some weapons to the NFL’s worst offense.

Another option off the edge on defense, Gross-Matos has the tools to be a disruptive force off the edge.  His long limbs give him the opportunity to make plays as a pass rusher than most could only dream of.  Currently projected in the low to mid 20’s, moving up a few spots to the Jets shouldn’t be ruled out.