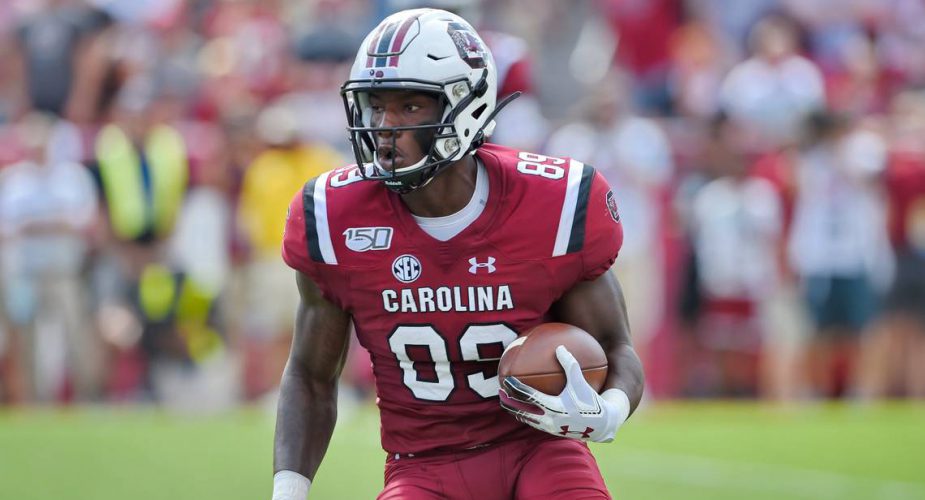 If Joe Douglas and the New York Jets end up taking an offensive tackle in round one as many are projecting, one of the next highest items on their shopping list should be a wide receiver.  Of course needs can change between now and the draft with free agency looming, but with Jamison Crowder as their only proven pass catcher, the Jets should be looking to add a couple of rookie recievers come draft time.

Here, we’re going to look at a potential target in South Carolina’s Bryan Edwards who has a penchant for making circus catches and big plays.

A big target in a deep draft class, Bryan Edwards and his 6′ 3” frame could be an ideal selection in the middle rounds for Gang Green as they look to build around Sam Darnold.  As you can see from the projection above, Bleacher Report actually has him going to the Jets with the 68th overall pick.

As a team caption from Conway, South Carolina, Edwards set a school record by logging at least one reception in all 48 career games played. He’s not a burner at the position, but has plenty of speed to make it as a pro.  His ability to make catches in tight coverage might be his best trait and it’s his ability to track the ball so well that allows him to make so many contested catches.

Edwards also shows plenty of toughness, lining up in the slot or boundary and running in-routes over the middle, absorbing big hits and hanging on to the ball.

Watching some more Bryan Edwards and this one jumps out. Has shown the ability to make big plays as a receiver and willing to take a hit over the middle, but tough as nails here as ball carrier against Alabama. pic.twitter.com/ROeEirmoxU

From the handful of games we’ve seen, you can’t question his toughness as a player who welcomes contact on reverses out of the backfield and takes big hits head on. Perhaps not as strong, but he’s reminiscent of current Jets receiver Quincy Enunwa in how he goes about his business, without any durability concerns.

On special teams, Edwards has had a limited look as a  punt returner where he has had 19 returns for 220 yards (11.6 YPR) without a touchdown.

Bryan Edwards was featured quite often in the screen game and looked to have a good feel for what was going on around him, used blockers well and made some big plays. pic.twitter.com/DiybAACRvF

If the Jets can nab a big target who can line up on the inside or outside who shows good hands and plenty of guts, it would be a step in the right direction as they look to develop Sam Darnold in year three as a pro.

By Glenn Naughton
Posted on February 9, 2020