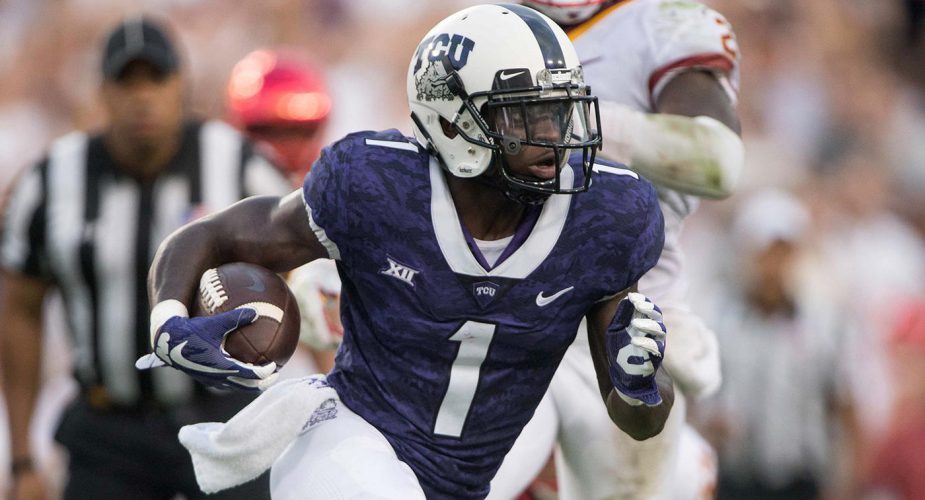 With the NFL offseason approaching, JetNation.com continues its draft prospect preview series by looking at another dynamic wide receiver in TCU’s Jalen Reagor.  In watching Reagor in action, two things jump off the screen.  His blazing speed is obvious right off the bat, but that isn’t what impressed us most.

Despite his relatively diminutive stature at just 5′ 11” and 195 pounds, Reagor plays much bigger than one might expect.  When he doesn’t find a way to get himself open with his explosion off the line, Reagor can go up and beat bigger cornerbacks for jump balls with surprising regularity.  Be it against top-ranked teams or lesser-known opponents, Reagor just wins the batlte for contested throws.

How in the world does Reagor come away with this ball? Bigger defender directly between him and the ball and Reagor rips it away for the catch. pic.twitter.com/2DPOcpuPbM

This gives Reagor an unexpectedly impressive catch radius and goes to show that personnel folks shouldn’t always get hung up on a receiver who doesn’t check in at 6′ 3”.  Some might expect Reagor to be designated to the slot, but in watching what he can do in tight coverage, team’s shouldn’t shy way from letting him play inside or on the boundary.

Anther excellent receiver in this class is TCU's Jalen Reagor at top of screen. Beats coverage with quick feet/stutter step and then climbs the ladder to haul in deep ball. Does this consistently so 5' 11'' frame doesn't tell the whole story. pic.twitter.com/GDuaeRYe35

He can go up and get it uncontested on a poorly thrown ball as we see here against Oregon State, but as we see in the same game, he has no trouble doing it with a defender on his back.

And again for Reagor in the same game. Top of screen with he goes up and hauls in the tall pass with a defender on his back. See this a lot from him. pic.twitter.com/ukSOanekRq

Reagor may not have the most refined route tree at this point in time, but given what he brings in terms of speed and attacking the football in the air, there’s no reason to believe he won’t be able to find early success as a pro.  Then of course there’s always the NFL combine where he may boost his stock if he shows he’s capable fo doing more than what was asked of him at TCU.

With the Jets likely grabbing an offensive lineman in round 1, their best shot at Reagor will be the second round which is where many draftniks have him going at the moment.  Expect Reagor to run his 40 in the low 4.4’s indy, showing that the speed we see on game day is no fluke.

Having also done some work as a punt returner, averaging over 20 yards per return in 2019, Reagor brings value on speical teams as well.