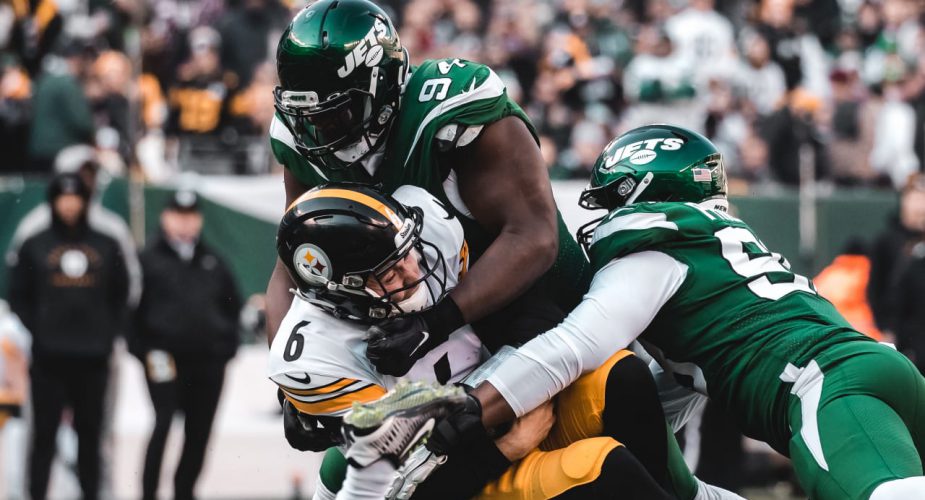 Jets fans are all too familiar with just how often Gang Green has prioritized the defensive line over much of the past decade come draft time.  In fact, only once in the last nine years have the Jets come away from the draft without a new defensive lineman on the roster.  Come time for the 2020 draft, Joe Douglas should be able to put the D-line picks on ice thanks to the recent emergence of three young linemen in Kyle Philips, Folorunso Fatukasi and Nathan Shepherd.

Yes, Quinnen Williams got all the attention after being taken in round one last year, and greatness should still be the expectation for the former Alabama product, but it’s the lesser-known linemen who chipped in quite a bit in 2019, helping the Jets to a top 10 defensive ranking.

Phillips, an undrafted free agent out of Tennessee may have been the best of the group, earning top 50 rookie honors from the folks at Pro Football Focus.  Phillips finished fourth on the Jets with 22 stops, a stat that is recorded when a defender gets a stop that is classed as a “failure” for the offense per PFF.  In more traditional numbers, he tied for fifth on the team with 7 tackles for loss, a number he shared with second-year player Folorunso Fatukasi.

Fatukasi was always viewed as a prospect out of Connecticut and spent a year on the bench as a rookie in 2018.  In 2019, he emerged as a dominant presence in the middle of Gregg Williams’ defense where he consistently took on and often beat double teams.  His performance showed up on film week after week and saw him earn one of PFF’s top run defense grades in the NFL at 87.5.  His overall grade of 81.5 was good enough for second overall on the Jets, trailing only All-Pro safety Jamal Adams who checked in at 88.2.

Last but not least, and perhaps the biggest surprise in the group (and honestly, not so young at 26) was Nathan Shepherd.  Maligned after a forgettable 2018 rookie season and a PED suspension at the start of year two, Shepherd showed signs of dominance at times and raised his stock considerably.  Once viewed as a certain cut after returning from his suspension, Shepherd at his worst looked like a solid rotational player and at his best, like a quality starter.

Nathan Shepherd gets the hit on Jackson after putting the center on skates, forcing incomplete pass. Shepherd and Fatukasi are easily most improved players from year one to year two. pic.twitter.com/PblEdUNmB3

All of this should be music to the ears of Jets fans who are well aware of their team’s need to fill holes along the offensive line and at wide receiver.  Had Phillips, Fatukasi and Shepherd failed to shine in 2019, defensive line would have been another big need for Joe Douglas to address this offseason.  Instead, a group made up of Quinnen Williams, Henry Anderson, Steve McLendon, Phillips, Fatukasi and Shepherd will allow the Jets to put the front line on the back burner.