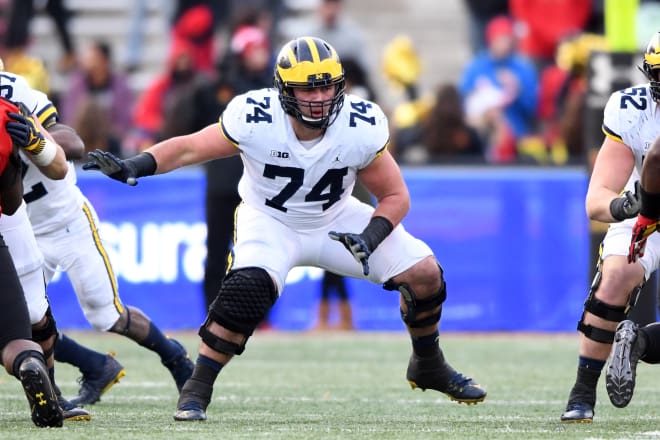 Today we continue our player previews leading up to the 2020 NFL draft.  With so many needs along the offensive line and wide receiver, expect plenty of write-ups on players at those spots.  This time around we take a look at Michigan offensive lineman Ben Bredeson.

We’ve been big fans of Bredeson for a few months now after watching some live action from earlier this season, but even we were surprised to see him top Mel Kiper’s positional rankings as the number one guard in this class.  We viewed Bredeson as a possible starter that could be had in round 3, which falls more in line with the projections shown above from NFL.com.  If executives are anywhere close to Kiper’s grade, there’s no way he’s there in round three.  So what did we see on game day out of Bredeson?

He sometimes loses ground when intial punch drills him in the chest, but will often reset himself and anchor to hold off oncoming defender.  Has plenty of strength when he locks on to his opponent but there are some issues with consistency.  However, earning second-team All-American at just 20 years old is an impressive feat.

Has shown great durability, appearing in 13 games as a freshman (8 starts) before starting every game through the rest of his college career, a total of 38 straight.  He started every contest at left guard but could probably play either side as a pro.  Has enough atleticism to get outside on tosses and screens but doesn’t hit his target as consistently as you’d like.

Bredeson plays through the whislte with a noticeable mean streak and has clearly impressed multiple evaluators.  We believe he’s an eventual starter who may not dominate but will be a well-rounded player which is something the Jets sorely need at this point.

BEN BREDESON (Michigan) is having a great @seniorbowl He’s mature, has strong legs and uses his hands well. He (along with John Simpson and Jonah Jackson) will be a day 1 rookie NFL starters at Guard. pic.twitter.com/ucndZnrbke

That being said, the most important thing about Bredeson was what we mentioned above in that desipte four years of high-level experience, he’s still just 20 years old.  In time, if he were to get bigger and stronger, with the right coaching, he could elveate his game to become an upper echelon player.