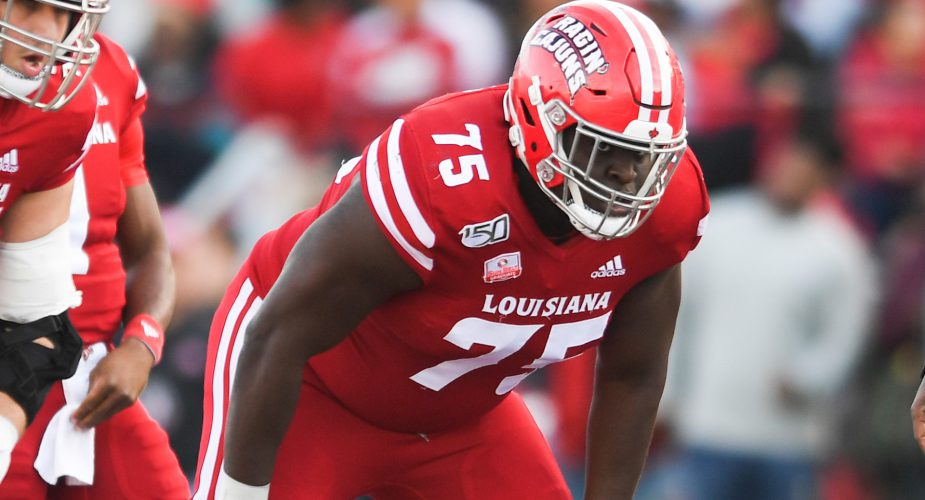 If pressed to choose just one word to describe Louisiana right guard Kevin Dotson, you might find yourself stuck between “Mauler” or just plain “snubbed”, because Dotson possesses immense strength, and also opened some eyes as one of the biggest snubs of the combine season.

Dotson is a durable interior lineman who earned first-team All-American honors, was a top performer at the East/West Shrine game and helped pave the way for one of the nation’s top rushing attacks at sixth overall (257 YPG). As a result, he was singled out by CBS.com, PhiladelphaEagles.com and The Draft Network as one of the biggest snubs among those who were not invited to Indy.  The folks at TDN went so far as to say Dotson being left out was “the biggest combine omission” of the year.

Kevin Dotson is by far the biggest combine omission. He was paired alongside Robert Hunt, and the two formed a formidable duo that consistently collected bodies weekly. Dotson has the makings of possibly being a future starter with more development down the road. Already possessing the nastiness of a long-time veteran, he’s a bit of a projection, but one that many teams should be sprinting to the podium to take a chance on during the third day of the draft. – The Draft Network

As we mentioned above, Dotson is incredibly powerful.  When he gets his hands on an oncoming defender, there’s little chance that said defender will be making a play on the ball.

Louisiana RG Kevin Dotson (75) shouldn've had a combine invite. Strong as a bull and plays through the whistle. Takes a defender several yards down the field before tossing him to the ground on this play. pic.twitter.com/ueEGC0xOIn

At one point Dotson had one of the nation’s longest consecutive games played streak at 50, and while almost every other member of the Ragin’ Cajuns O-line was knocked out of action or shuffled along the O-line due to injuries, Dotson stayed put and played at a high level.  Dotson lacks elite quickness for a guard, but seemed to surprise onlookers with better than expected footwork during Shrine week in St. Petersburg, FL.  This, after becoming the first player in Louisiana to be named first-team All-American.

A key cog in a fantastic running attack and a good pass blocker as well.  In game action he showed the ability to pick up stunting defensive lineman and had good punch at the point of attack, slowing oncoming rushers.  According to pro football focus, Dotson allowed just 1 sack and 2 quarterback hurries on 411 pass blocking snaps in 2019.

He has been durable, he has been dominant, he has been recognized as one of the top players in the nation, but he won’t be in Indianapolis this week.  He will however, hear his name called before others who are at the combine in Indy, before getting a chance to develop in to a starting guard at the pro level.

One of my favorite Shrine Bowl practice moments this week. Louisiana-Lafayette OL Kevin Dotson is one of my favorite players down here. Power to spare. Dominant at times. pic.twitter.com/4uqsehbRKD