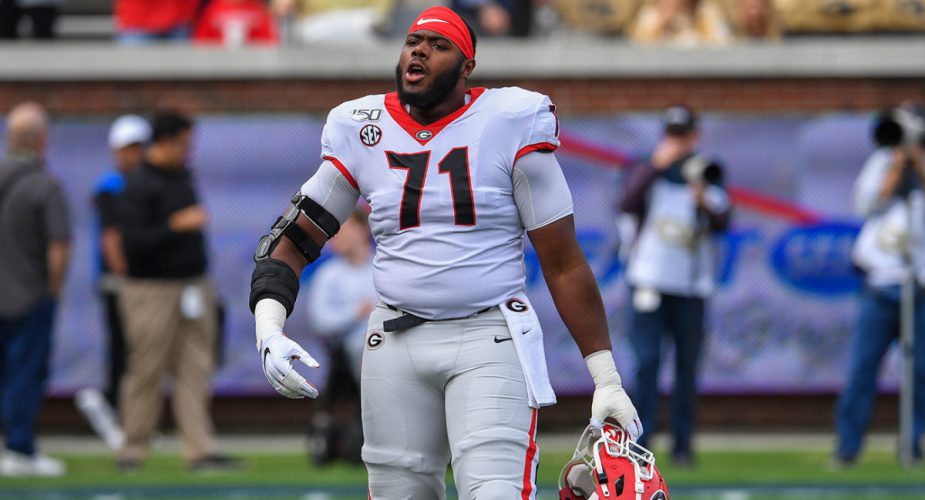 Here at JetNation.com, we try not to jump on the bandwagon and churn out fifteen mock drafts per year.  We’ll do a few, but this one will be different for a few reasons, so allow us to explain.

We don’t know how free agency will play out, and this isn’t a video game.  With that in mind, we’ll assume some additions are made in free agency, but it’s not going to be a full haul of all the best players on the market at every area of need.  These will also be the moves that most impact the draft.

Here are the parameters we’ll be working with.

In addition, this mock will be a dueling mock between JetNation Radio hosts Alex Varallo and Glenn Naughton with a brief explanation for each pick.  All picks will be made using an online simulator, picking only from players who are on the board when the Jets are on the clock.  So, without further ado…our JetNation Radio mock draft 1.0.

Georgia OT Andrew Thomas:  For one reason or another, Thomas is being mocked almost universally as being an option at 11 despite being viewed as a top 5 pick for the days and weeks following the NFL season.  Whether it’s Thomas, or any of the other tackles on the board, this is a win for the Jets as they protect Sam Darnold’s blind side for years to come.

Georgia OT Andrew Thomas: Alex sees it the same way.  Far too good a player at a critical position of need that couldn’t be passed up.  Despite rumors of the Jets having interest in Henry Ruggs III here, an OT makes too much sense to pass up.  Joe Douglas finally finds a replacement for D’Brickashaw Ferguson.

Wisconsin EDGE Zack Baun: Some of the receivers still on the board were tempting, but in looking at supply and demand, Joe Douglas grabs an edge rusher who can do a bit of everything and has a great football IQ.

Wisconsin EDGE Zack Baun: Great minds think alike, and so do we.  Baun’s hard-nosed style of play and versatility will go over well in Gregg Williams’ defense.

Reads this play perfectly. QB doesn't have the ball yet and he's already attacking the receiver, dislodges the ball for incomplete pass. pic.twitter.com/LJepPvOMH5

Baylor WR Denzel Mims: This receiver class is so deep that a few first-round talents are bound to fall to round two.  This is the case here as the Jets add a dynamic pass catcher in Mims out of Baylor.

LSU Guard Damien Lewis: Alex goes back to the trenches and picks up a lineman from a major program who is viewed as one of the top interior linemen in the class.  Lewis plays with a mean streak and figures to start right away no matter where he’s drafted.

Fresno State OG Netane Muti: This pick comes with some risk as Muti has dealt with ACL and lisfranc injuries in the past, but as a boy among men in the trenches, we’re rolling the dice.  This is a potential pro bowl player with the 79th pick.

Texas WR Collin Johnson: In this scenario, the Jets take advantage of the depth at receiver in this class by addressing other needs with their first three picks before grabbing a quality target with pick number 79.  Johnson should be able to create plenty of mismatches at 6′ 6” with a huge catch radius.

Michigan OG Ben Bredeson: Bredeson comes from a program that does a nice job of developing O-linemen in Michigan and has tons of starting experience for a player who is jsut 21 years old.  He’s still developing and getting better and appears to be a player who can steal a starting job early on.

Oregon G/C Shane Lemieux: Lemieux would give the Jets a ton of flexibility on the O-line when looking at previous picks and additions in free agency.  A player who is good enough to eventually become a starter, Lemieux makes sense after hearing the Jets stress the importance of adding players who offer versatility, which Lemieux has.

South Carolina WR Bryan Edwards: Edwards won’t be taking part in the combine after breaking his foot last week but should be fine when the season rolls around.  This is a player with excellent hands who checks in at 6′ 3”.  He had a productive career at South Carolina and has WR2 ability.

Kentucky WR/RB/KR/PR/QB Lynn Bowden: What is there to say about Bowden other than “he can do it all”?  A dynamic player who excelled no matter where he was asked to play at Kentucky and figures to be an offensive weapon for somebody in the very near future.  This pick clearly shows a hope that it’s for the Jets.

Libery WR Antonio Gandy-Golden: Three receivers might seem like a lot, but when the only proven receiver you have under contract is a slot guy in Jamison Crowder, it’s time to address the issue.  Gandy-Golden is a bit of a project but there’s a ton of upside for the 6′ 4” Liberty product who does a fantastic job of playing even bigger than that with his ability to high point the football.

Michigan CB Lavert Hill: Remember, we’ve already added Byron Jones in this scenario and we’re expecing one of the other CB’s on the roster to compete for back up roles behind Jones and Bless Austin. Also wouldn’t rule out another cornerback addition in free agency, but Hill brings depth.

You remember Leon Washington, right?  You’d like to have a guy like that on the roster again, wouldn’t you?  Well, that’s what Reggie Corbin can be.

Another running back in this spot but this time it’s for the smaller and quicker Darius Anderson.  Neither Anderson nor Dillon would be locks to make it, but with more special teams ability, Anderson would have to have the edge.  An excellent cutback runner with some explosiveness out of the backfield, he could be a good option to spell Le’Veon Bell from time to time.

So there you have it, and to sum things up side by side: