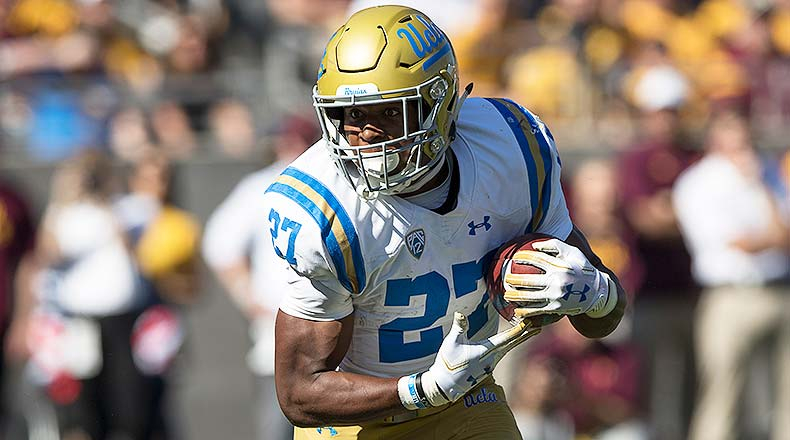 Joshua Kelley transferred from UC Davis to UCLA, after the 2016 season led to a coaching change. With the Aggies, he had 1,139 yards and 7 touchdowns. His transfer only allowed him to attend two California schools, UCLA and USC, so he chose to become a walk-on for the Bruins.

In his first full season in 2018, Kelley had six 100-yard games, including a whopping 40 carry, 289 yard performance against the rival Trojans, most in school rivalry history. Kelley is only the 8th running back in UCLA history to have back-to-back 1,000 yard rushing seasons, as well as the 14th all-time rushing leader with 2,303 yards. He ranked 2nd in the Pac-12 in rush yards per game in 2019 (96.3). Kelley had a stellar four touchdown game against Arizona State in 2019, finishing with 12 TDs rushing for the second consecutive season.

Joshua Kelley had himself a solid combine, finishing in the top-10 amongst running backs in every drill except for the vertical jump. He was also one of the standouts at the Senior Bowl, showing flashes in practice and during team drills, followed up by big chunk plays in the game. Even Senior Bowl director Jim Nagy has some positive words, saying Kelley is the “sleeper in this year’s RB class”. While he may not project to be a starting back at the next level, Kelley can add a good deal of talent to any running back room in the league. His lack of reps as a pass catcher and pass protector would best project him to play in a power run scheme, but his hands look efficient enough to trust him on any down. When given the space, he can turn a short check down pass into a long gain.

THE sleeper in this year’s RB class is UCLA’s Joshua Kelley. Checking all boxes in pre-draft process. He’s the guy NFL teams are staying quiet about hoping they can steal him early Day 3.
✅ Ran for 105 yards in @seniorbowl
✅ Infectious energy in interviews
✅ 4.49 40-yd dash pic.twitter.com/ZvQHwwP4wf

The Jets currently have only two or three backs that should make the final 53-man roster, Le’Veon Bell, Josh Adams and Trenton Cannon. A late round pick in 2018 and a special teams contributor mostly, Cannon is not a lock for the roster, and Adams has one year left on his deal while playing limited action with the team. Bell needs all the help he can get in the backfield , and if Gase could figure out a way to use Kelley as a compliment to him properly, the UCLA product has potential to be a late round gem in New York.