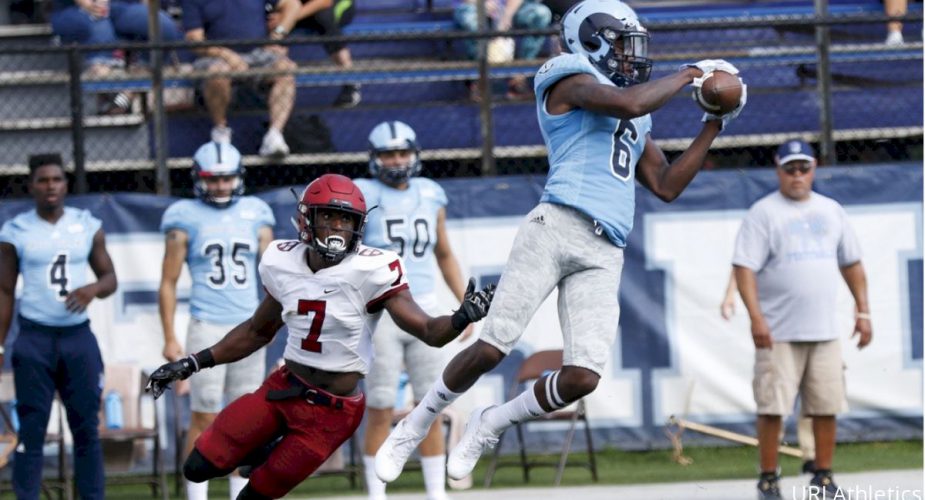 While Jets General Manager Joe Douglas contemplates what to do in the first round of the NFL draft, likely choosing between an offensive tackle such as Tristan Wirfs, Jedrick Wills or Andrew Thomas or a wide receiver along the lines of Jerry Jeudy, Cee Dee Lamb or Henry Ruggs III, he could have a chance to add quality depth at both spots later in the draft from the same school.

Just a few hours up the road from the Jets team headquarters in Florham Park, NJ sits the University of Rhode Island where there are  a pair of draft prospects that the Jets should consider as they look to build both their offensive line and their wide recevier group.

At receiver, Rhode Island is led by 6′ 2” speedster Isaiah Coulter who, in an extremely deep draft class, is viewed by some as a late day two or early day three pick.  Showcasing the ability to create separation between himself and opposing defensive backs, Coulter was able to rack up 72 receptions for 1,039 yards and 8 TD’s last season at Rhode Island.

Naturally there will be some questions about the level of competition Coulter did it against, but in a rare opportunity to play a bigger program, Coulter torched Virginia Tech for 150 yards on 9 receptions.

Was watching Rhode Island to check out Kyle Murphy and WR Isaiah Coulter and Va Tech had no answer for Coulter that day. 9 rec for over 150 yds. Could probably get Coulter in rd 4/5. Good size at 6' 2'' and shows off 4.45 here. pic.twitter.com/qiwhCDDLAc

When discussing the receiver position in this year’s draft class with Emory Hunt of football game plan, he named Coulter as a player the Jets could do their homework on as a possible replacement for the departed Robby Anderson.  You can check that interview out right here.

Moving along to the offensive line at Rhode Island, one prospect who has caught our attention is the versatile Kyle Murphy.  While Murphy has played multiple spots along the line at RI, he projects as a guard in the pro’s but has some traits that should also make him a late day two/early day three pick.

University of Rhode Island guard Kyle Murphy…talk about a non-stop motor. Lined up at LT here (projects to G), pushes defender almost 10 yards off the LOS before he pancakes him, then pancakes him again when he tries to recover. pic.twitter.com/wQfsmlg9WX

As one would expect from a player chosen in that range, Murphy will need some work in being able to drop anchor more consistently against oncoming bull rushers and his hand placement which can be a bit sloppy at times.  According to Kristian Dyer of Sports Illustrated, the Jets set up a video meeting with Murphy as one of many prospects they’ll consider.

While Coulter and Murphy are the top prospects out of Rhode Island, there is a third player who could also garner some attention in wide receiver Aaron Parker.  A tough receiver who shows the ability to high point the ball while consistently winning contested catches.