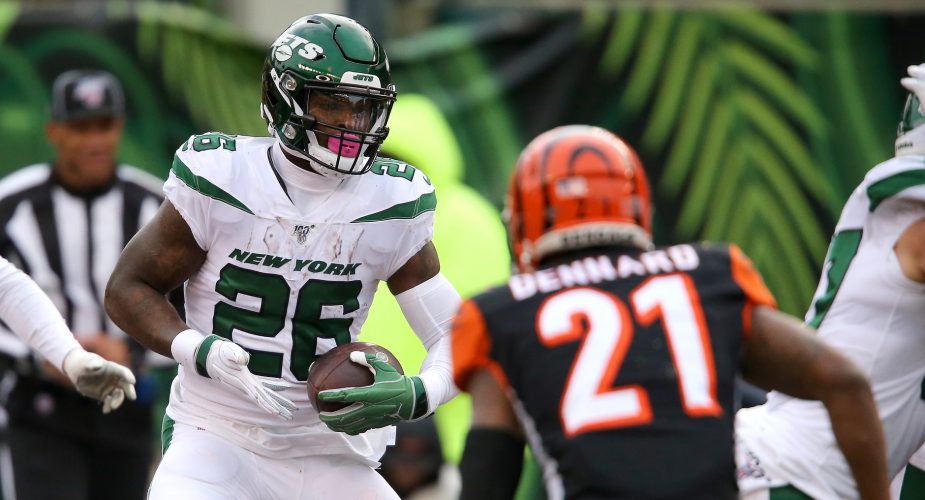 Le’Veon Bell’s long-awaited arrival last offseason did not exactly go as planned for the Jets in 2019. Bell only managed 3.2 yards per carry, a career-low, behind a punchless offensive line. Bell is expected to be back for at least this season, but the depth chart behind him looks pretty bare. Let’s dive into the Jets options to backup Bell on the current roster and through the upcoming Draft.

The only running backs on the roster with a shot to make the Week 1 team are Bell, Trenton Cannon, and Josh Adams. (Kenneth Dixon and Jalin Moore are currently on the roster but are not viewed with a real chance to make it past cut-down day).

Cannon, a sixth-round pick in 2018 out of Virginia has scarcely played so far in his young career. He was active for four games last season but took only one offensive snap. As of now, his ceiling looks like a gadget special teams player, borderline worthy of making the team. He does not look like a #2 running back.

Josh Adams signed with the Jets last season after being cut by the Eagles, but barely played. However, he had a productive rookie season in Philadelphia in 2018. Adams rushed for 511 yards after many injuries freed up carries for him with the Eagles. Adams deserves an opportunity to produce. It is clearly not a viable running back room as currently constructed. Expect the Jets to dip into the Draft for a back, likely on Day 3, so let’s look at what might be available there.

In an ideal scenario, the Jets would be able to take a running back on Day 2 of the Draft, but with dire needs elsewhere, that does not look like very likely. New York has huge holes at OT, WR, Edge Rusher, and CB that will probably be taken care of before running back. These are the best bets for the Jets first four picks. It is highly possible that a RB is the next greatest need, and it should definitely be addressed early on Day 3.

In the fourth round, names like Anthony McFarland Jr. from Maryland, Joshua Kelley from UCLA, and Ke’Shawn Vaughn from Vanderbilt have been tossed around. McFarland is a speedster with a few medical issues, while Kelley and Vaughn are less explosive, but more instinctive runners who will grind out every yard.

Some fifth round options could be Lamical Perine out of Florida and Antonio Gibson from Memphis. They are both big backs with some underrated receiving skill.

Later round options are JaMycal Hasty from Baylor, Raymond Calais from Louisiana, and Darius Anderson from TCU. GM Joe Douglas should be looking toward Round 4 as the right time for a running back. There should be some good from guys who can step in from the get-go to compliment Bell.

This would be possible if he were able to address the bigger needs on the first two days. The top option to appears to be Anthony McFarland Jr. He has blazing speed and is a big-play ticking bomb, as shown when he burnt the loaded Ohio State defense for three runs of 50+ yards in 2018. His game would go perfectly with Bell’s slower and patient running. This combo would keep defenses on their toes with two different running styles.

McFarland had a nagging injury hurting his 2019 production, but he seemed to get over it towards the end of the season, making him a viable option as an RB2 should the Jets go in that direction.