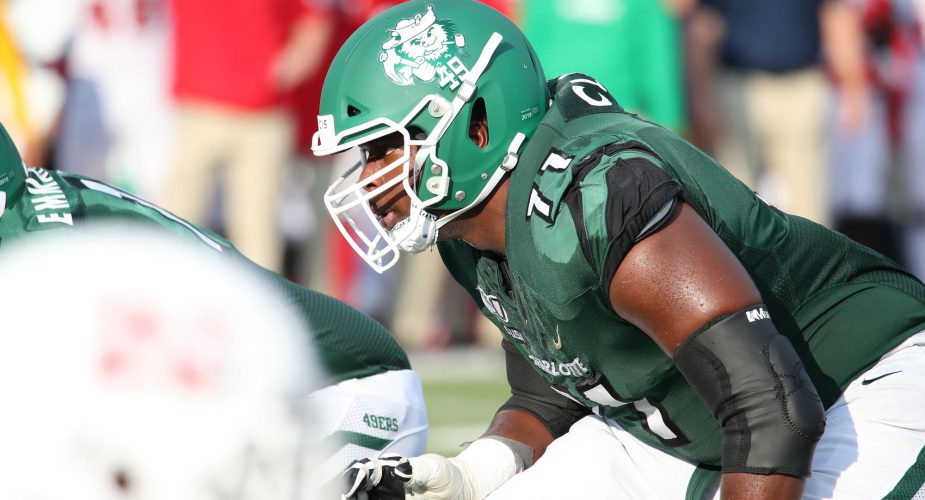 The Jets finished up a very busy 4th round of the NFL draft by selecting Cameron Clark, an offensive tackle from Charlotte. The 6’4″, 308lb Clark played left tackle in college but there was talk that he would move inside to play guard in the NFL.

YES! Love Cameron Clarke pick. Looked like a beast against Clemson. Showed he can play with the big boys.

Love the #Jets getting Mekhi Becton and then turning around and getting Cameron Clark. 2 finishers and tone setters upfront to protect Sam Darnold.pic.twitter.com/Jcw85lDJrP

Here is his scouting report from NFL.com.

Clark has good arm length and played almost exclusively at left tackle, but his game is better-suited at guard. He has good upper-body power to shock and plays with a mauler’s demeanor when battling and finishing. Lateral quickness is below average in the run game and his pad level needs to be corrected for a move inside. He’s not a slick move-and-mirror pass protector, but length and redirect power are weapons to work with if he can get his footwork and punch-timing shored up. He had outstanding moments against Clemson but didn’t sustain that level of play throughout the season. The flashes are there but he needs to play with better consistency to make a mark.