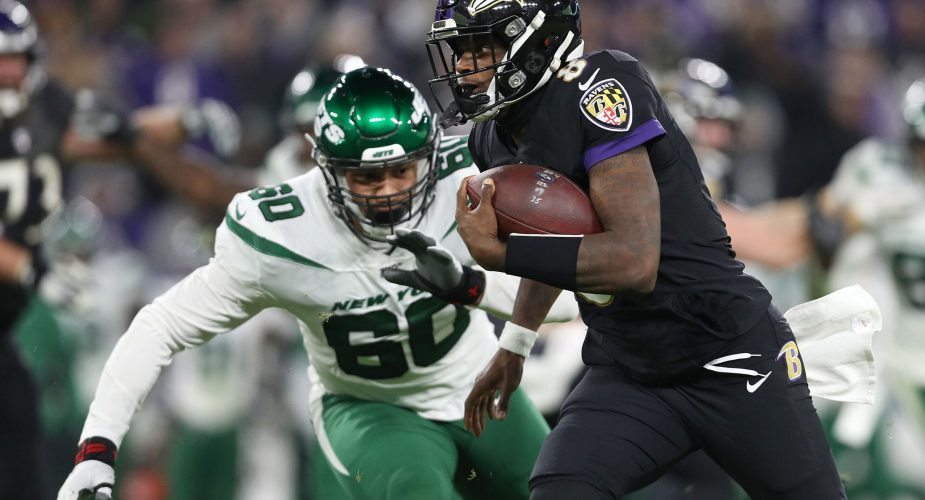 We’ve all heard, said and read it a million times over.  The New York Jets haven’t had a viable rusher off the edge since the days of John Abraham whose final season with the team was way back in 2005.  Since then, there have been a string of busts consisting of Vernon Gholston, Lorenzo Mauldin and Ik Enemkpali to name a few.  But could the Jets have an edge rusher already on the roster who is just waiting for an opportunity?

When you look at the criteria for being an edge rusher as a starting point, you generally want an explosive athlete with upper-tier production at a major program, so as to avoid the Dylan Donahue’s of the world and preferably a guy who has shown he can compete against NFL linemen.

Why is it then, that we hear so little about Jets edge rusher Jordan Willis?  I can hear it now; “Jordan who”?  Well, we’ll tell you who.

Listed at 270 lbs, Willis is an athletic freak who racked up 20 sacks over his final two seasons at Kansas State, earning Big 12 defensive player of the year honors in 2016 when he tallied 11.5 sacks.  His performance at the NFL combine answered any questions about his explosiveness and athleticism as he would have ranked in the top 10 of every category in this year’s class.  In fact, when compared to other Jets edge players, he ranks at the top of almost every category and no worse than 2nd in any of them.  Just take a look at the numbers, and  we’ve even thrown in former NFL scout Pat Kirwain’s explosion score to see how each player stacks up.  An explosion score above 70 is considered excellent.

One of the reasons we decided to dig deeper with Willis was the fact that even though he rarely saw the field, we were seeing some good work from him on some All 22 reviews and wondered just how often he saw the field last season and if our opinions were echoed elsewhere.  For that, we turned to the folks at Pro Football Focus, and it seems that at least they saw things the way we did.

It would hardly come as a surprise to any Jets fan that all-pro safety Jamal Adams earned the teams highest grade when rushing the passer in 2019 at 89.9.  But of course that’s looking at a DB coming in as an extra blitzer.  We wanted to see where Willis stacked up among the team’s outside linebackers and defensive ends.  The answer?  Number one.

That’s right.  With just 105 pass rush attempts, Willis earned a PFF pass rush grade of 74.8.  The next highest DE or OLB on the list is Jordan Jenkins at 67.4.  With a total of 11 quarterback pressures (8 hits, 2 hurries and 1 sack), Willis averages a pressure roughly every 10 snaps, so is he a candidate to break out with increased reps in 2020?  It sure would be nice, so we can stop talking, hearing and reading about how long it’s been since the Jets had a presence off the edge.