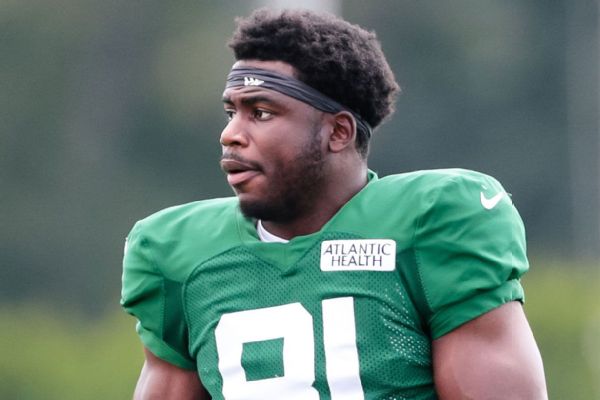 The roster purge for injured veterans continues for the New York Jets. Today the team announced several moves, the biggest one was the release of injured wide receiver Quincy Enunwa. Mike Maccagnan signed Enunwa to a four year, $36 million extension late in 2018. Enunwa only played one game after signing that deal.

Enunwa, who had been placed on Reserve/Physically Unable to Perform in May due to the neck injury he suffered early last season, was the Jets’ sixth-round selection in the 2014 draft out of Nebraska. He played in 41 games (30 starts) over five seasons and amassed 119 receptions for 1,617 yards and five touchdowns. In his most productive season of 2016, which was also the only one in which he played 16 games, he had 58 catches for 857 yards and 4 TDs.

With the release of Brian Winters and Quincy Enunwa, there are no more John Idzik draft picks left on the Jets. Also, no players who played for Rex Ryan. #nyj

Cannon was the Green & White’s sixth-rounder in the 2018 draft out of Virginia State. He saw action in all 16 games in ’18, rushing 38 times for 113 yards and a touchdown and catching 17 passes for 144 yards. In four games last season he was used primarily on special teams as a gunner and as a kickoff return (5 returns for 96 yards).

Braden came to the Jets as an undrafted free agent OL out of Michigan in 2017. He spent all of 2017 on the practice squad, played in two games at the end of the ’18 season and in last year’s finale at Buffalo.

Ray began 2019 as an undrafted rookie free agent out of Boston College with Cleveland. A final cut by the Browns, he moved to the practice squads with Houston and Buffalo before joining the Jets’ practice squad on Nov. 25. He spent the final four weeks of the season there, then signed a reserve/future deal with the Jets at the end of the season.

The Jets are now at 80 players on the roster so they no longer have to do split-squad workouts. #nyj

You can visit our forums to read more about the Jets releasing Quincy Enunwa.