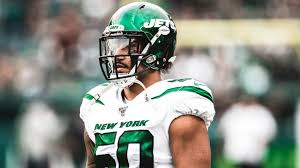 The Jets announced a few roster moves earlier this week. Frankie Luvu was placed on I.R.

The Jets have placed OLB Frankie Luvu on injured reserve.

Cornberback Bryce Hall has been cleared to join practice again.

The Jets have designated rookie CB Bryce Hall to return to practice.

Hall (6-1, 202) was placed on the reserve/non-football injury list at the beginning of the season. He was the Green & White’s fifth-round draft choice out of Virginia and he played in only six games for the Cavaliers in 2019 before sustaining a season-ending ankle injury. He totaled 20 tackles, 3 tackles for loss, 1 sack and 4 pass defenses. In 2018, he led nation with 24 PDs and was named All-America second team and All-ACC first team. Hall totaled 154 tackles, 9.5 TFLs, 4 sacks, 5 INT and 38 PDs in 42 games.