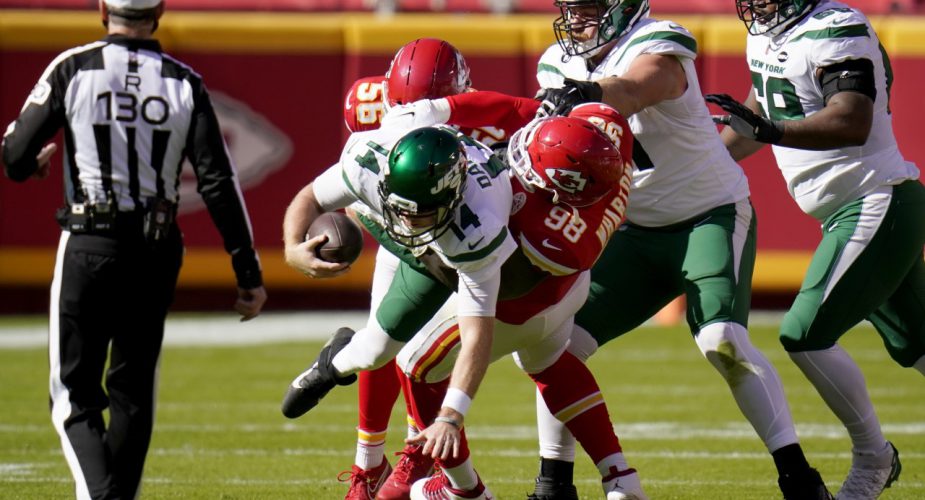 In the second week of the “Dowell Loggains Experience”, the Jets offense once again looked much improved to start the game. Sam Darnold started off strong, throwing 12/18 for 106 yards, but the team only came away with three first half Sergio Castillo field goals, with a fourth attempt being blocked on the final play of the half. Former MVP Patrick Mahomes looked like his usual self, tossing three easy touchdown passes on the Chiefs first 4 drives. Denzel Mims got involved early, replicating his Week 1 yardage output in the first quarter, with 42 yards on 2 catches, including a magnificent sideline catch for 27 yards. Unfortunately, he never saw another target.

The second half looked much like last week as well, with many drives ending in punts. The offensive line gave Darnold little to no time to throw, and he had to scramble for his life once again. He even took a hard hit to his right shoulder late in the fourth, the same shoulder he injured against Denver in Week 4. After absorbing that hit, Darnold only threw one pass, a throw away out of bounds.

Quinnen Williams continues to be a threat on the defensive line, adding 2 TFLs and 1 QB hit to his already impressive 2020 season. Rookie Ashtyn Davis had a rough outing in the secondary, and Jabari Zuniga came on the field late for reps once the game was out of hand. The Chiefs, inevitably, had their way with the Jets, pounding them into submission with 5 Patrick Mahomes passing touchdowns, to the tune of 35-9. Will Loggains be given another shot at play-calling duties next week? New York travels to New England to take on Bill Belichick and the 2-5 Patriots.

.@QuinnenWilliams been all over the place.