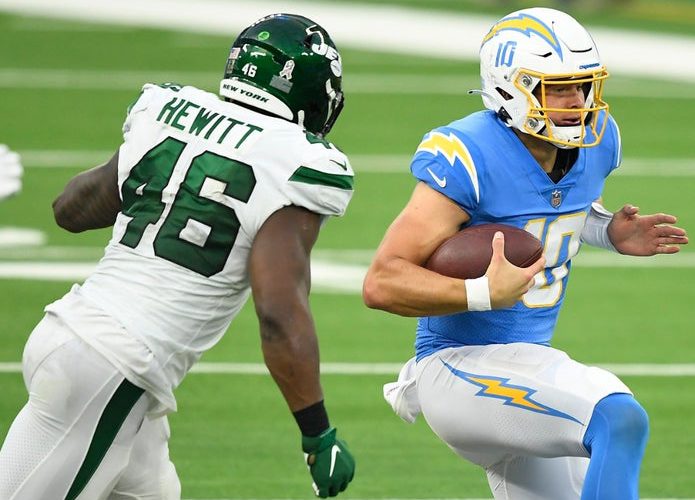 For the second week in a row, Adam Gase and the New York Jets avoided a blowout by making some big plays on offense and giving Jets fans just a little bit  of reason for optimism for the future despite a 2020 season that could very well end up with the team posting an 0-16 record.  So who stood out and who went bust?  Let’s take a look at the grades.

Jets receivers were targeted just twice in the first half as the offense couldn’t get off the ground early on.  Adam Gase was quick to throw Flacco under the bus, saying the calls were made but Flacco didn’t pull the trigger.  According to Gase, wide receiver Jamison Crowder was open often enough that he could have had 15 receptions in the first half.  The second half was a different story as Flacco opened things up and made some big throws to Breshad Perriman and Denzel Mims, leading the Jets to a total of 28 points, coming up just short in a 34-28 loss.

Gase’s ground attack centered around 37-year-old Frank Gore once again despite speculation earlier in the week that LaMical Perine’s time to be the featured back had come.  Both Gore and Perine averaged 4.1 yards per carry and each found the end zone. Gase’s refusal to give Ty Johnson any run is mind boggling.  He was given a carry a month ago, picked up a 30-yard run and hasn’t seen a carry out of the backfield in any games since then.

Denzel Mims looks like he’s going to be a headache for defenses moving forward (3 rec, 71 yds) and Breshad Perriman is making a case for a contract extension as he hauled in another deep touchdown pass, this time a 49-yard bomb from Flacco.  Crowder was quiet but didn’t see many opportunities.

Finally, a Chris Herndon sighting.  After dropping  his first target of the day, Herndon hauled in two passes for 32 yards and a touchdown, neither of which were routine catches.  An actrobatic twisting grab got Herndon his first reception while the next was a leaping fingertip grab in the end zone.  That’s the player the Jets saw two years ago as a rookie who has struggled since being converted to a blocking tight end this year under Gase.  Is he over the yips?  Stay tuned.

Mekhi Becton had his best game as a pro and the blocking up front was probably the best the Jets have seen all year.  Flacco had time to throw and the running backs had room to run.  A huge step in the right direction.

Henry Anderson  had what was easily his best game of the season and Quinnen Williams picked up another half sack.  Chargers running back Kalen Ballage was held to just 44 yards on 16 carries, a average of just 2.8 yards per attempt.  There wasn’t as much pressure from the D-line as you’d like, but the Chargers took advantage of a young overmatched secondary and got the ball out in a hurry.

Chargers tight ends and running backs were shut down for most of the day but we can’t ignore the fact that they weren’t needed all that much as chargers receivers chewed up the Jets secondary.  Jordan Jenkins picked up a half sack early in the game and was very active all-around, notching 9 tackles.  Neville Hewitt led the linebackers with 11 tackles on the day.

We’re not going to kill this group with their grade because they performed at about the level you’d expect for a rooking making his first start on the boundary (Bryce Hall) as well as in the slot (Javelin Guidry) with another undrafted rookie at corner in Lamar Jackson.  The Chargers made big plays as expected, but some of it could be chalked up to inexperience as defenders were in position to make plays but reacted just a split second to slow.  The hope is that we see improvement over time.  Rookie safety Ashtyn Davis had 12 tackles and a fumble recovery.

An early blocked punt by Henry Anderson that was picked up by Quinnen Williams was a big play, but after that we saw missed extra points and little to nothing in the return game.

Having claimed he gave up play calling duties several weeks ago, Adam Gase revealed to the media after the game that he is in fact calling plays in so that he has veto power to make the call if he doesn’t like what Dowell Loggains sends in.  So basically, Gase is calling the plays.  With this being the case, the lack of shots taken to wide receivers early on was a huge mistake that put the Jets in a hole that they couldn’t dig themselves out of.  Nothing stopping Gase from telling his QB put up a jump ball in Denzel Mims’ direction to give him a chance to make a play.

So while the offense has shown improvement in recent weeks, there are still a good number of head-scratching decisions being made.