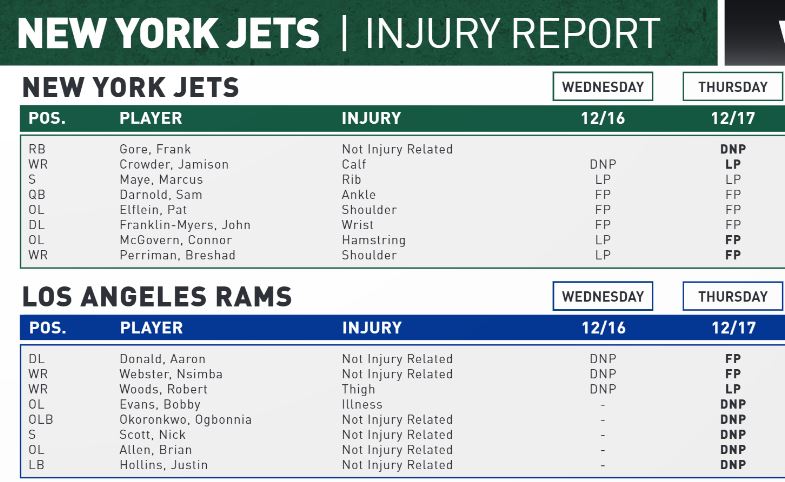 As the NY Jets head down the final home stretch of the season they have announced several roster moves. Yesterday LB Jordan Jenkins and S Saquan Hampton were placed on IR. They also announced that recently waived kicker Sergio Castillo has been added to the practice squad. Adam Gase told the media today that there is a good chance that Sam Ficken will be back on Sunday.

The injury list this week is shorter, per Coach Gase: Frank Gore will be out with non-injury, just his normal Thursday off; (Jamison) Crowder and Marcus Maye will both be limited, and that is it for the injury report.

Sam Darnold was on the injury report yesterday and here was the update today.

I think it was from the game. I’m sure he hadn’t been feeling great body-wise, I mean he gets torqued quite a bit, his lower body. Like guys when they go to tackle him, they all drop to his legs and torque him. It’s more precautionary for us that we put him on there just in case something flares up.

Coach Gase also said that Jordan Jenkins was in a lot of pain and could be looking at surgery.

Hampton (6-1, 206) was signed to the active roster Dec. 12 and ruptured his Achilles against the Seahawks. He signed with the Jets’ practice squad Nov. 3 after the Saints waived him with an injury settlement on Sept. 14. He was drafted by New Orleans in the sixth round in 2019 out of Rutgers.