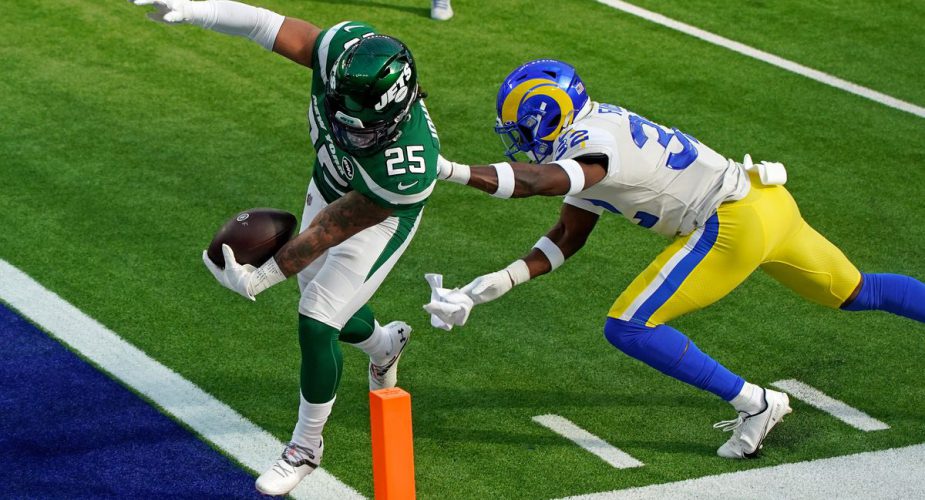 New York did the exact opposite that everyone thought they would do today. The offense came out hot, again, leading their 8th game-opening scoring drive in a row. After forcing the Rams into three straight 3-and-outs, newly signed J.T. Hassell made a phenomenal special teams play, blocking Johnny Hekker’s kick. This set the Jets up to take an early 10-0 lead. After a beautiful Bryce Hall one-handed interception, and each team adding a field goal before the break, New York took a 13-3 into the locker room. Sam Darnold had things clicking with quick passes, going 11/15 for 72 yards and 1 TD in the first half.

Coming out of halftime, New York opened up with a superb 11-play touchdown drive to make the score 20-3. Frank Bush’s defense looked much better today, continuing to generate pressure on Jared Goff, including Quinnen Williams’ 7th sack of the season. Unfortunately, Williams was injured in the second half and didn’t return with a head injury. Once he left the game, the run game became susceptible to gashing runs by Cam Akers, including a long would-be go-ahead touchdown that was called back on a holding penalty. Rookie punter Braden Mann made his 4th TD-saving tackles of the season, and continues to look like a solid late-round draft pick for Joe Douglas. On the ensuing Rams possession, Marcus Maye made the play of the game, deflecting a deep 4th down pass to Gerald Everett. With the Jets needing to gain one more first down to solidify their first victory of the 2020 season, Darnold tosses a play action pass over the middle to none other than Frank Gore to move the chains. With 2 games left to play, New York officially surrenders the lead for the 1st pick in the 2021 NFL Draft to the Jacksonville Jaguars. The Jets travel home to host their final game in MetLife against the Cleveland Browns.

.@QuinnenWilliams got the power and the quickness.

J.T. Hassell making plays in his first game as a Jet 🛫