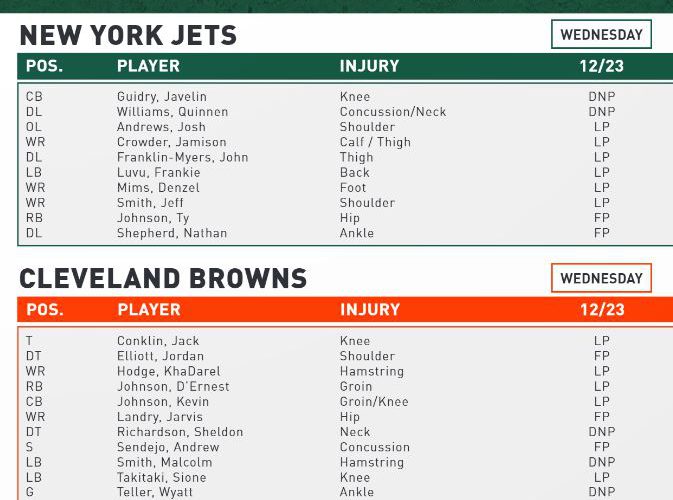 The NY Jets have made a few more roster moves today as Quinnen Williams was placed on IR. Ryan Griffin was added to the Covid-19 list. Adam Gase also told the media that LB Harvey Langi was placed on IR.

Here is the full injury report that Gase gave to the media on Wednesday before practice.

Gase was asked about Quinnen William’s performance this year:

He’s done a good job. Obviously, Sunday you saw what kind of impact that he had, made a ton of TFLs, was in the backfield, created pressure. I felt like he had a good run of games. I felt like his consistency was pretty good. I mean there was a few games where it was like, he kind of disappeared, but it didn’t happen a lot. Last year, I felt like there would be a couple of games in a row where you kind of didn’t really feel him, but this year I felt like the high majority of the games that you felt him. If you were on the other team you felt him, whether you’re playing quarterback or in the run game.

It looks like Ryan Griffin won’t be available on Sunday. Per Brian Costello at the NY Post.

The Jets placed TE Ryan Griffin on the reserve/COVID-19 list, per the transaction wire. #nyj